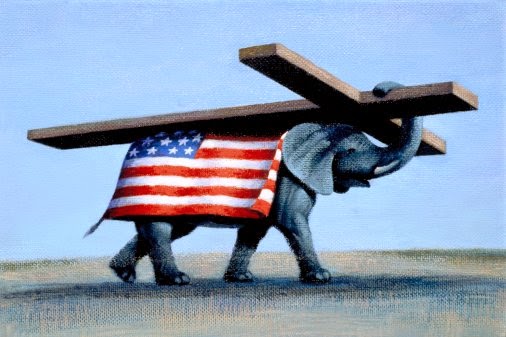 Christians in the first three hundred years of the faith were not tempted to become entangled with politics or to advance the Gospel by passing laws. Some say it’s because the Roman empire was so pagan and evil that no Christian would want to participate in it. But really it was no more evil than any other worldly empire. And historically there were many Roman soldiers and political officials who actually DID convert to the faith. In fact, this happened often enough that several early Christian teachers created a policy for how to respond to this trend.


As Hippolytus of Rome says: "A soldier of the civil authority must be taught not to kill men and to refuse to do so if he is commanded, and to refuse to take an oath. If he is unwilling to comply, he must be rejected for baptism. A military commander or civic magistrate must resign or be rejected. If a believer seeks to become a soldier, he must be rejected, for he has despised God." (from "Readings in World Christian History", pp. 17-22)

And as Origen explains: “It is not for the purpose of escaping public duties that Christians decline public offices, but so that they may reserve themselves for a more divine and more necessary service in the Church of God – the salvation of men. And this service is at once necessary and right." (from "Origen Against Celus")

So, the early church certainly had the opportunity to take full advantage of a growing number of political converts in positions of power throughout the Roman Empire. Why not capitalize on that? Why not infiltrate the military command and turn the sword away from the throats of their martyred brothers and sisters?


Why? Because they saw clearly that political entanglement was a snare and a distraction from their main mission. Furthermore, they were unwavering in their devotion to Jesus and to His Kingdom. They stayed the course. They kept the faith.

If the early church understood who they were and what their mission was so clearly, why do Christians today find it so impossible to imagine following Jesus apart from political affiliation?

As Ross Rohde’s excellent article revealed, the Religious Right aligned itself with the Republican party to help elect Ronald Reagan. That started a snowball effect that we are still suffering from today where millions of American Christians can now no longer imagine Christianity without Conservative Republicanism.

As Ross put it, the American Church was ensnared much as a pimp grooms a new prostitute – seeking the girl who is pretty but not the center of attention. By manipulating her need to be noticed, and valued, the pimp can exploit her and get her to believe that if she keeps doing what the pimp asks her to do, “one day” she will realize her dreams.

However, that’s not where the pimping of American Christianity really began. As Princeton historian Kevin Kruse details in his new book, “One Nation Under God: How Corporate America Invented Christian America,” our country’s religious prostitution began in the 1950’s.

Kruse explains how business leaders plotted to link Christianity, Republican politics, and libertarian economics tightly together. Why? To help drive a wave of public piety and create a feeling of solidarity between Christians and Corporations who might both see “Big Government” as a common enemy.

And the goal was simple: to entangle Christianity with Republican politics in order to benefit big business.

As Kruse explains: “The reason they [corporations] start making this argument about freedom under God is that it’s a much more effective way to push back against the regulatory state and the labor unions. It’s no longer businessmen making the case for businesses. It’s ministers.”

And why Christian ministers? Because they were better at propaganda. “They’re very effective at making this argument that a state that restricts capitalism will inevitably restrict Christianity. They link economic restrictions with religious restrictions. It requires a bit of a leap of faith, but it’s one that they effectively sell,” says Kruse.

Other historians agree, including Kim Phillips-Fein whose book "Invisible Hands" also documents this unholy alliance between 1950's Corporations and the Christian Church.

Both Phillips-Fein and Kruse credit a pastor by the name of Reverend Fifield - whose large Los Angeles congregation was made up mostly of millionaires - as one of the most effective ministers in the Capitalistic Christian movement. “Fifield disregards all of Christ’s warnings about the dangers of wealth,” says Kruse. “He completely disregards the injunction to look out for one another. To love your neighbor, to be your brother’s keeper. He discards all of those messages. It becomes a faith of individualism.”

In order to make it all work, the teachings of Jesus had to be downplayed. The Sermon on the Mount needed to be moth-balled in favor of more sermons about individual faith, civic duty, and paying taxes. Christianity began to slowly mirror the ideals of Capitalism, and soon enough Jesus was re-branded as the poster boy for the American Dream.

Another minister, James Ingebretsen, President of a group known as Spiritual Mobilization (itself created by Revered Fifield to further this same cause) also admitted: “Fighting the forces that wanted to abolish the free enterprise system was my mission, not promoting Christ.”

This well-funded crusade to entangle the Christian faith with Republican Conservatism gained momentum in the 1970's and 1980's as evangelical leaders like Robertson and Falwell took the wheel. As Phillips-Fein notes in her book, one of the leading fund raisers for this movement, Richard Viguerie, affirmed that “the next real major area of growth for the conservative ideology and philosophy is among evangelical people.”

And what was the result? As Kruse explains: “[This movement] had been launched to roll back the New Deal and instead it helps inspire a new sort of religious nationalism.”

Which is where we are today.

And my question for you is, "Did it work?"

Have you bought their propaganda? Is your faith now entangled with Conservative Republican values? Are you, even now, still unable to separate your faith in Jesus with your political ideology?

I must confess that I was a victim of this propaganda. I was raised in a Republican home. I voted in every election since I was legally able to vote and I always voted "straight ticket" Republican.

I listened to Rush Limbaugh. I read his books. I watched the Republican National Convention every election year on television.

I cheered for my Republican President, and I griped and complained about those Liberal Democrats who were ruining our nation and threatening to bring down the wrath of God upon us.

It's manipulation. Pure and simple.

We are all the victims of a well-funded, decades-long campaign to twist our faith into an easy to control voting block.

This is why it is so imperative for us to open our eyes, throw off the chains and return to Jesus – and Jesus alone – as our Lord and King.

I encourage you to read these verses with new eyes:

"Let us throw off everything that hinders and the sin that so easily entangles. And let us run with perseverance the race marked out for us..” (Hebrews 12:1)

“No one serving as a soldier gets entangled in civilian affairs, but rather tries to please his commanding officer.” (2 Tim. 2:4)

“But whatever were gains to me I now consider loss for the sake of Christ…I consider them garbage, that I may gain Christ and be found in him..” (Philippians 3:7-9)

Here's an idea: Sit down tonight with your bible. Open up to the Gospel of Matthew. Find the Sermon on the Mount. Read it slowly. Listen to Jesus with a new heart.

If I could, I would like to challenge you to crucify your Nationalism; crucify your Political affiliation; put to death anything that exalts itself against the Lordship of Jesus.


I challenge you to follow Jesus totally untangled from this world.

“They promise them freedom, while they themselves are slaves of depravity—for ‘people are slaves to whatever has mastered them.’ If they have escaped the corruption of the world by knowing our Lord and Savior Jesus Christ and are again entangled in it and are overcome, they are worse off at the end than they were at the beginning.” (2 Peter 2:19-20)

My new book "Jesus Untangled:Crucifying Our Politics To Pledge Allegiance To The Lamb" is available now on Amazon.

Part 14: "What Would Wilberforce Do?"

Love it Keith...and the state still seeks to manipulate the church: http://www.foxnews.com/politics/2015/04/27/epa-spends-84000-to-study-churches-that-preach-climate-change/

Many factors are involved. The Republican Party was, in the words of Lyndon Johnson, handed the South when the 1964 Civil Rights Acts was signed. The history of so-called "Christianity" in the US begins with Old Testament loving Puritans and ends in the present day with Old Testament loving "Christian" Zionists. Their Judaized version of "Christianity" has no place for the teachings of Jesus. Catholics jumped ship from the Democratic Party to the Republican Party after 1973 and Roe v Wade. Libertarian economics and political NeoConservatism were created by (anti-christian) Jewish thinkers. Most so-called "Christians" in the USA are Zionists and are committed to the Jewish state and peoples.

Yes it is amazing how people who claim to be set free in Christ can get so tied up in other stuff.

The Truth Project sheds a lot of light here -

Though I agree with much of what is stated in the article and in this comments section, I implore you to look deeper into the various resources on this subject. The true student of history realizes that it's just never so simple as we might want to think. We should always look deeper at all the factors involved in a situation. I believe that this is also something that we Christians are called to. We should truly echo the words of our Lord and be "Wise as serpents and harmless as doves".