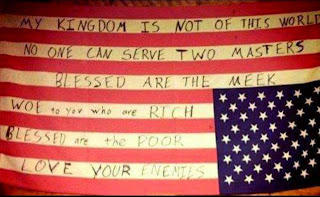 [Part 8 in the "Jesus Untangled" series]

“We are therefore Christ’s ambassadors, as though God were making his appeal through us.” (2 Cor. 5:20)

As followers of Jesus, we are His representatives – specifically, his Ambassadors – to the world around us. This speaks to the reality of Christ’s Kingdom being separate from the Kingdoms of this world, and of the need to bridge the gap between the two. That’s our job.
As Ambassadors, we are called to live out the customs, and the values of Christ’s Kingdom in this strange and alien land so that those who are natives here can see for themselves what life is like in the Kingdom of God.


They should see how we – in obedience to our King – handle conflict in our Kingdom, by loving, forgiving, blessing, and serving those who come against us.
They should see how we value the outcasts, how we love the poor, and how we care for those people that most everyone else wants to ignore or marginalize.

Certainly there is a time for being “all things to all people so that some might come to know our King” and perhaps decide to immigrate – even defect – to our Kingdom. But we must always be careful to remember the values and customs of the Kingdom of God. Why? So that our lives may reflect the radical differences between these two Kingdoms.

Our job as Ambassadors is to represent our King and to provide a constant example of the contrast between those who live in His Kingdom and those who do not.


If anyone ever looks at our lives and becomes confused about that essential difference, then we have failed in our mission.
Some may suggest that it’s possible to love two nations at once. For example, can’t someone love both France and America. Why not? What would be the problem in that? Well, on the surface, nothing is wrong with that, at least until we discover that the leaders of one nation have declared war against the other. Now what? We cannot continue to maintain loyalty to both nations in that case. Now we need to make a choice. Are we going to stand with one nation, or the other?


Make no mistake, the kingdoms of the world – and that would also include America – are man-made, self-serving political empires. They are not seeking to do God’s will. They are at war with Christ and His Kingdom. They oppose Jesus and His commands. They mock His agenda. They ignore the values of His Kingdom (love, mercy, justice, grace, compassion, service, etc.) and embrace the values of this world (war, violence, torture, exploitation, greed, lust, etc.).
The Kingdom of God and the American Empire are not congruent. They are not complimentary. They are opposing forces with radically different goals, values and ideals.


Just ask yourself: Does my nation officially devote itself to the specific person of Jesus? Does my nation acknowledge Jesus alone as Lord and King? Does my nation base any of its laws or policies on the Sermon on the Mount?
If you answered “No” to any (or all) of those questions, your nation is not Christian and it stands against the Kingdom of our Lord.


“You adulterous people, don’t you know that friendship with the world means enmity against God? Therefore, anyone who chooses to be a friend of the world becomes an enemy of God.” (James 4:4)
Certainly, we can decide to remain neutral and just wait to see which nation wins the war, but in our case we already know which nation is going to win – the Kingdom of God. So, we have to choose: do we pledge allegiance to our earthly nations or to the Kingdom of God?


We live here on this earth now as strangers and aliens, awaiting a better country that is from above. [see Hebrews 11:13-16]
One day, and it may be very soon, the kingdoms of this world will be overcome and obliterated by the Kingdom of our God. [see Rev. 11:15]
Our mission is to live as if that day was here and now and to occupy until He comes to sit upon His earthly throne. [see Luke 19:13]


Life under the rule and reign of our King is better by far than anything anyone could ever experience or imagine. It’s a way of life that can never be duplicated under any other system of human government. No matter how good or humble or kind their leaders may be, no one compares to Jesus, our King.
So, let us pledge allegiance to the One true King, and the One true Kingdom. We cannot serve two masters. Especially if Jesus said it was impossible.

Part 13: "Welcome To Post Christian America"
Part 14: "What Would Wilberforce Do?"
Part 15: "Crucify Your Politics"