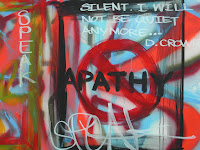 My buddy Greg Russinger hit this one out of the park. I wish more churches had been there, especially those who have a stated concern for issues of justice locally here in the OC. There were several churches conspicuously absent. Otherwise, there was a lot of great information, a lot of people who went home knowing they cannot look away.

I've begun to pray about writing for the local newspaper, or the OCWeekly (a free weekly newspaper with an insane distribution count and a history of reporting on issues the local newspapers ignore). I'm sort of tired of trying to wake of the church on issues of justice (or injustice) and now I'm feeling God's call to call attention to things that grieve His heart. I need to write these stories for whoever will listen. I need to provoke the people of God to move, or to wallow in their own apathy while the pagans take steps to "do justice, and love mercy".

More on this over on the [Subversive Underground] later this week...I promise.

Here's a great FREE event coming up next Sunday afternoon that I want to invite you to.

I'll be there along with event host Greg Russinger (my friend), and several hundred others who are concerned about human trafficking, children-at-risk and slavery.

This conference is geared toward university students, young adults,and the public from Southern California. It's FREE, and will be heldfrom 2pm-7pm on Sun, March 25th at Vanguard University in Costa Mesa.

The idea behind Freedom Day is to mark the 200th anniversary of whentransatlantic slavery was abolished in Europe, and to remind the worldthat slavery--human trafficking--still exists. March 25th is a callto awareness and action in our own backyard, and in our world.

Also feel free to forward this to your colleagues or anyone who may beinterested in attending.

Hope to see you there.
-kg
Posted by Keith Giles at 7:30 PM No comments: