SOMEONE TO RULE OVER US 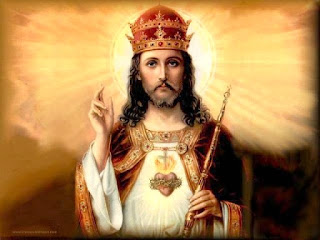 It’s one of the saddest statements in the entire Bible. When God tells the prophet that His people are rejecting Him as their King, you can almost hear God’s heart break.

God’s original design was for us to be His people and for God to be our King. That’s the way it was from the time God called His people out of Egypt and led them through the wilderness and into the Promised Land that He had prepared for them.

But eventually they rejected Him as their King, saying “We want a King like all the other nations of the earth have.”

At first, God’s prophet felt rejected because he was the main voice of God to the people, but when he reported this news to God [as if He didn’t already know the hearts of His own people], God’s response was clear: “They are not rejecting you. They are rejecting me.”

But He also promised to establish a New Covenant with His people; one where that original design was re-established. As God put it:

"It will not be like the covenant I made with their ancestors when I took them by the hand to lead them out of Egypt, because they broke my covenant, though I was a husband to them,” declares the Lord.

“This is the covenant I will make with the people of Israel after that time,” declares the Lord.
“I will put my law in their minds and write it on their hearts. I will be their God, and they will be my people.” [Jeremiah 31:31-33]


In other words, God was promising to bring everything back into the shape it was always meant to be in.

He would be our God, our King, and we would be His people.

No longer would we seek to place another human being over us. Never again would God’s people seek out a surrogate for Him.

We would have direct access to the King, with an open invitation to boldly approach His throne of Grace at any time.

God would invite us to call Him “Abba” or “Daddy”.

He would call us friends, not servants.

Our allegiance and loyalty would be to God, and to Him alone. He would be our King.

Our hearts would not desire “a King like all the other nations have” because our King would be God Himself.

This is the very same covenant that Jesus confirmed with His disciples before His arrest and crucifixion. It’s the same new covenant that we celebrate every time we eat the bread and drink the cup together.

It’s a covenant with God where His rule and reign over us is re-established and confirmed.

Under the New Covenant, God is once again our King. Jesus is proclaimed as our “Lord” which means He is our ruler.

Yet some today are returning again to that same practice of shrugging off the rule and reign of God as their King.

They DO want a new king. In fact, they’re crying out for a human leader “like all the other nations have” who can give them what they want: power, safety, security, prosperity, and respect.

Just listen to what the pastor of the oldest megachurch in America just said about the kind of leader he wants to rule over him:

"When I'm looking for a leader who's going to fight ISIS and keep this nation secure, I don't want some meek and mild leader or somebody who's going to turn the other cheek. I've said I want the meanest, toughest SOB I can find to protect this nation.”

Many more Christians in this nation want a leader to rule over them who is just as tough, and as violent, as possible. They don’t want someone like Jesus as their King. They want a leader, “like all the other nations of the earth”.

And whether they know it or not, they have rejected God – even His son, Jesus – as their King.

The earliest Christians understood this. They knew that Jesus stood as a rival to Caesar. They went to their deaths because they refused to say "Caesar Is Lord!" and instead cried out defiantly: "We have no King but Jesus!"

Once Constantine corrupted the faith by wedding the Church to the State, that all changed. Suddenly Caesar appeared to be on our side. Being a Christian didn't necessarily mean that Christ alone was King.

Almost overnight, the people of God said once again, "We don't want God to rule over us anymore. We want a King like all the other nations have."

Why? Because now Caesar was promising to protect them, to give them power, to offer them prestige, and comfort, and security.

Maybe it’s time to remember what the New Covenant was really all about? Maybe we need to remember that Jesus came as a King, to establish an eternal Kingdom where His people would submit to His rule and reign in their actual lives?

Maybe we need to say, along with those early Christians “We have no King but Jesus!” and “We have no Caesar but Christ!”

Read my new book "Jesus Untangled: Crucifying Our Politics To Pledge Allegiance To The Lamb" available now on Amazon.

Email ThisBlogThis!Share to TwitterShare to FacebookShare to Pinterest
Labels: christ the king, crucify your politics, Jesus is Lord, jesus untangled, jesus without religion or politics