HOW TO SAVE AMERICA 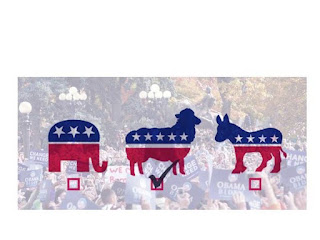 In this insane election cycle, which seems as if it will never end, claims on both sides of the political divide are made about the need to "save America" or "restore our nation".

Many Christians are concerned that a vote for the wrong candidate might destroy us all, or even worse that God might be angry at them if they fail to cast a ballot for the right candidate.

It doesn't help when Christian pastors and televangelists on television, radio and the internet declare that "God told them" who His choice is, or that certain candidates might actually be demons in disguise, or in league with Satan himself.

What can we do? How can we save America from certain doom?

Let me assure you of a few things:

Take that in for a moment.

Christians already have all the power they need to transform this nation and save America.

We are not lacking anything in that department whatsoever.

The Gospel of the Kingdom that Jesus announced over 2,000 years ago is still the most powerful weapon against evil, corruption, violence, hate and every other sin known to mankind.

Do you believe that? I mean, really believe it?

If so, please don't buy in to the fear-based nonsense that so many Christian celebrities are spouting at you right now.

Put your trust in your King. Jesus is still on the throne. We have nothing to fear. Our victory is already assured.

Start sharing the Good News of the Kingdom. Let everyone know that Jesus is the best leader anyone could ever have. Make sure you remind them that He loves them and that He would rather die than live without them. Give them an opportunity to become an ambassador like yourself. Teach them to follow Jesus daily and show them how to put His words into practice.

Very soon you'll begin to notice that your community, and America itself, is becoming more Christ-like, as the influence of Jesus continues to expand and spread across the fruited plain.

This is how we make America great.

This is how we save this nation. Not by casting a vote for a politician that is corrupt, selfish, dishonest and absolutely incapable of bringing any positive change to anyone, anywhere, at any time.

Let's face it. The two major party candidates for President have never been as odious or pathetic as these two are.

Voting for one or the other is like being told you can choose between a poop sandwich or a vomit smoothie. Yes, you get to choose, but like it or not you will be expected to ingest one of them.

But there IS a third option. His name is Jesus. He has actual power to change humanity from the inside out.

If He is your Lord, cast your vote for Him and begin campaigning for His election.

[My name is Keith Giles and I approve this message]

-kg
**
NOTE: My new book, "Jesus Untangled: Crucifying Our Politics To Pledge Allegiance To The Lamb" is NOW AVAILABLE on AMAZON.

I was listening to this today and thought the parallel with how God "confused the tongues" of the people of Babel - and how God "may" be confusing the tongues of our leaders today - as a result of separation from Him. Found it interesting and somewhat relevant to your post! Jeremy