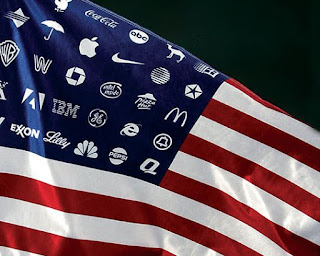 Many Christians love bumper sticker slogans like “Not of this World”, but strangely don’t consider what that really means.

To say you are “not of this world” means you don’t participate in the ways of this world. Some of those ways include: Politics, War, Nationalism, the Pursuit of Money or Fame, etc.

Most Christians reduce the slogan to only cover things like “Lust, Envy, Murder, Adultery”, etc., and while they are correct that Christians should not practice those sins, that’s not what the scriptures are referring to when they instruct us to “not love the world or anything in it” [1 John 2:15]

The World is just that: the World. This includes Governments, Kingdoms, Rulers, Nations and the like.

Notice that we are told not to love 2 things: “The World” and “Anything in the World”.

Pledging allegiance to Jesus is about submitting to His rule and reign over your life. As citizens of Christ’s Kingdom, we live under His laws. We are obedient to the Nation of God which stands in total opposition to every other kingdom and nation on this earth.

Those who become citizens of Christ’s Kingdom renounce their citizenship and their loyalty to their birth-nation.

“Do not conform to the pattern of this world, but be transformed by the renewing of your mind.” – [Romans 12:2]

The "pattern of this world" is obvious. People form tribes, establish governments, select rulers, write laws, and begin to seek the power necessary to dominate other nations around them. This is the way of the world, but it is not the way of the Kingdom of Christ.

Our way is love. Our new pattern was established by Jesus, our King. It's not about exercising power over others, it's about exerting our power to come beneath others and love them as Christ loved us.

Once you have become a citizen of Christ’s Kingdom, your relationship with your previous country of origin shifts. You are no longer loyal to the charter of that government. Instead you are now an ambassador of Christ and His Kingdom. This means you do not participate in the politics of that country where you serve as liaison. You are now an agent of a Holy Nation which stands apart from all other nations. You now have no other King but Christ. Yes, as an ambassador you obey the laws of the nation you live in, but whenever those laws contradict your home nation’s laws, you must not obey them, even if it means suffering the consequences.

At issue is "How do we as followers of Jesus best impact our culture?" Jesus had an answer: "Go into all the world and preach the Good News of the Kingdom, making disciples and teaching them to obey all that I have commanded you."

There are no scriptures about voting or running for office, but there are plenty of NT verses about not being entangled with the affairs of this world...and what's more "an affair of this world" than Politics or War?

As the Apostle Paul told us:

"No one serving as a soldier gets entangled in civilian affairs, but rather tries to please his commanding officer." - [2 Tim. 2:4]

We are soldiers in another army – the army of God. We are fighting for His Holy Nation, not the nations of this earth which only seek to gain power and wealth at the expense of others.

As soldiers who fight for the Nation of God, we have to keep in mind a few things:

*We do not fight with violence, but with proactive displays of Christ’s transformational love. [1 Cor. 4:9]


As citizens of a new, eternal and Holy Nation, we also must remember:

*Our fellow citizens are from every tongue, and tribe, and nation on this globe. [Rev. 7:9-10]

*Those who remain entangled in the affairs of worldly nations must be set free [Rev. 18:4]

*Every nation and empire on this planet is already doomed to fail [including America] and will soon be overcome by His Kingdom [Rev. 11:15]

*We cannot serve two nations or two masters. Our loyalty must be to Christ’s Kingdom alone. [Matt. 6:24]

Sadly, many Christians today have forgotten all of these things. Or, they never knew these things because they were never preached from the pulpit, or they never read the Gospel first-hand.

Instead, these Christians tearfully pledge allegiance a national flag. They proudly affirm that their nation is the best. They send their children to fight and die for the advancement of their nation’s values and corporate interests. They are more upset when someone disrespects their country’s flag than when someone blasphemes their King. They are more moved to tears at the sound of their national anthem than they are when they encounter the oppression of people that Jesus loved enough to die for.

For those Christians who are untangled from the affairs of this world, politics are pointless attempts by mere mortals to solve problems which are not political in nature.

Those who remain entangled in worldly politics can only write and pass laws. But for those who have pledged their allegiance to Christ’s Kingdom is granted the power to transform hearts and renew minds.

Those who have transferred their citizenship over to the Nation of God know this: The world is being remade from within. Even now the Gospel of Jesus is constantly making all things new and changing human hearts to be more like Jesus. When change comes to this world it will not be from the outside in, but from the inside out.

This is why we have abandoned the call to conform to the patterns of this world: War, Politics, Nationalism, Tribalism, Patriotism, Greed, Wealth, Fame, Fashion, and the like.

We understand that transformation is our King’s battle plan.

For millennia, men and women have been establishing governments and selecting kings and queens to rule over them; each time with the same results.

The definition of insanity is this: “Doing the same thing over and over again, expecting a different result.”

We choose to abandon these empty and foolish patterns. We reject the insanity. Instead, we embrace transformation. We choose to love. We resolve to put into practice the commands of our King and we await the coming of His Kingdom on earth.

And when it arrives we won’t have any trouble adjusting to it, because we will have already been living under His rule and reign all of our lives.

“The kingdom of the world has become the kingdom of our Lord and of his Messiah, and he will reign for ever and ever.” [Rev. 11:15]

Email ThisBlogThis!Share to TwitterShare to FacebookShare to Pinterest
Labels: america, jesus untangled, metanoia, pattern of this world, repent, repentance, the gospel is about transformation, the gospel of the kingdom, the kingdom of god, think different

Great article Keith! Many Christians just don't realize that the WHOLE world system is corrupt. Like you stated, it's not just a moral issue but it's everything. John wrote very succinctly about this when he said:

Thanks for taking a stand bro. We are definitely not of this world!