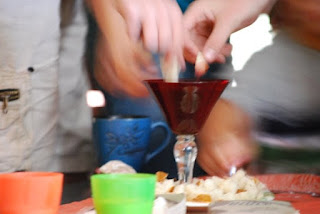 In Exodus 29:33, God gives instructions to the priests regarding how the sacrifices are to be performed, and by whom. In this section, God wraps it up by saying:

“They [the Priests] are to eat these offerings by which atonement was made for their ordination and consecration. But no one else may eat them, because they are sacred.”

Got it? Good. Now, let’s skip over to Hebrews chapter 9 where we read about how the old covenant [the “first covenant”] was set up with rules and regulations about the tabernacle [and later the temple] and how all of those things were “copies” or symbolic of the “realities” which were found in Christ.

“The law is only a shadow of the good things that are coming—not the realities themselves.” [Hebrews 10:1]

Now, I’d like you to notice something that the writer of Hebrews points out in Hebrews 13:10:

“We have an altar from which those who minister at the tabernacle have no right to eat.”

Under the Old Covenant, the priests of that old covenant were the only one’s allowed to eat what was offered on that altar. No one else had the right to eat from it.

But now, under the New Covenant, “we have an altar from which those who minister at the tabernacle [those priests of the old covenant] have no right to eat.”

What is “our altar”? What is it that we have a right to eat that they, and others, do not?
It’s Christ!

Jesus is our true High Priest. He is our true sacrifice for sins and upon the cross he offered up his own life in the temple of his body as an atonement for us.

Just like in the Old Covenant, only a certain group of people had the right to eat of the meat that was sacrificed for atonement. Who were they? The priests of that old covenant.

Now, under the New Covenant, another sacrifice for atonement is made, and only a certain group of people have the right to eat of that meat that was offered. Who are they? Us! And what does that make us? It makes us priests in the Kingdom of God.

Jesus gave us His body to eat. He said that only those who eat his flesh and drink his blood have any life in them. At the last supper, Jesus said, “This is my body which is broken for you. Take and eat.” And then he took the cup and said, “This cup is the new covenant in my blood.”

Paul says it this way:

So, if we are “in Christ” then we are the only ones who have permission to eat of the flesh that was offered for atonement, and when we eat of that flesh, and partake of that sacrifice, we are also accepting our “ordination and consecration” as priests under the New Covenant of God.

“As you come to him, the living Stone…you also, like living stones, are being built into a spiritual house to be a holy priesthood, offering spiritual sacrifices acceptable to God through Jesus Christ.” [1 Peter 2:4-5]

"But you are a chosen people, a royal priesthood, a holy nation, a people belonging to God, that you may declare the praises of him who called you out of darkness into his wonderful light. Once you were not a people, but now you are the people of God; once you had not received mercy, but now you have received mercy." [1 Peter 2:9-10]
Halleluiah!

I don’t know about you, but I’d never seen this before and now that I’ve connected those dots, it unlocks many other realizations about our identity in Christ.

Can’t wait to hear what you think! If you enjoyed this, please consider sharing this post on Facebook or Twitter or on your other social networks to bless others as well.


*My Body
*For The Love Of Your Pastor
Posted by Keith Giles at 6:38 AM

Priesthood of all believers - a people. Good insight.

Absolutely correct...and if we REALLY get this concept we have unlimited power and authority as kings and priests of the Most High. There is so much more that the body needs to understand about the Kingdom that has been ignored. BUT God is uncovering those things that have been hidden and waiting for us in this day to begin to move into! Dare we believe?? Romans 8:19 "For the creation waits in eager expectation for the children of God to be revealed".