THE SINS OF THE WORLD? 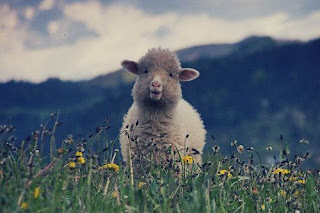 When John the Baptist points to Jesus and proclaims, “Behold the Lamb of God who takes away the sins of the world”, what exactly does that mean?
Here’s one possible meaning that you might not have considered before.
If we’re going to answer the question, we need to first understand and define our terms. If Jesus is going to “take away the sins of the world” then we need to agree on what “the sins of the world” are.
Sin is simply disobedience to God’s law. And according to Jesus, the greatest commandments in God’s Law are to "Love God and Love others". He actually says that the whole Law rests on these two commands. So, if loving God and loving others are the essential imperatives, what is the greatest sin? A lack of love.
So, to “take away the sins of the world”, Jesus would have to erase our inability to love God and love others.
If this is true, then Jesus died to show us what love really is. He died to teach us how to love God and how to love others, and he even empowers us to love our enemies.
This means that Jesus "took away the sins of the world” by showing us how to love the way He loves.
Rather than say that the wrath of God was poured out upon Jesus as he suffered on the cross, it might be more accurate to say that our wrath was poured out on Jesus.
We killed him. Those in power - the religious elite and the powers of the Empire - colluded together to put to death the Messiah who came to show us how to love and serve one another.
Through the cross, Jesus confounded those powers, and by rising from the dead and speaking the words "Peace" to them, and to us, after taking the worst we could throw at him, Jesus demonstrated the power of love over wrath. He took away the sins of the world and nailed them to the cross and triumphed over the power of hate by responding with love, and forgiveness and he made peace between God and men.
After giving us the power to abuse him, Jesus emerged victorious and said, “Peace be with you.” [John 20:19]
I’ve only recently noticed that the Passover lamb, to which Jesus is compared, never “took away the sins” of the people. The blood on the door post was a sign that God’s people were putting their trust in Him for protection from the Angel of Death, but that lamb’s blood didn’t wash away their sins. It only provided a sign of obedience that helped the righteous escape death.
However, there is another image in the Old Covenant whereby the sins of the people were taken away. That would be the scapegoat which God described to Moses in Leviticus:
"Then Aaron shall offer the goat on which the lot for the Lord fell, and make it a sin offering. But the goat on which the lot for the scapegoat fell shall be presented alive before the Lord, to make atonement upon it, to send it into the wilderness as the scapegoat. Then Aaron shall offer the bull of the sin offering which is for himself and make atonement for himself and for his household, and he shall slaughter the bull of the sin offering which is for himself." – [Lev. 16:9-11]
So the scapegoat which is left alive and released into the wilderness is the actual picture of how the sins of the people are taken away, not the Passover lamb.
Certainly, Jesus is both and his suffering on the cross fulfills all of these shadows for us.  But perhaps it’s worth exploring just how Jesus “takes away the sins of the world” and what that means for us who follow Him daily.
What are your thoughts?
-kg
Posted by Keith Giles at 2:44 AM

Email ThisBlogThis!Share to TwitterShare to FacebookShare to Pinterest
Labels: following jesus into love and nonviolence, lamb of god, scapegoat, sins of the world, the atonement

Are you suggesting that the forgiveness of our sins is dependent on how well we love God and others? It sounds like you are putting a condition on God's forgiveness.

If so, I think anything that puts the power of achieving forgiveness of sins in our power reduces the mind-blowing scope of what Jesus did on the cross. And if it is based on how well we love God and others, was Jesus' death really needed?

This sounds like Girard's Mimetic Theory, which is becoming more widely embraced by many as an explanation for the cross of Christ, but I remain unconvinced that this theory offers an adequate explanation that encapsulates all of what happened in realms seen and unseen on the cross.

I'm not suggesting that our forgiveness is conditional.

I'm also not a fan or a follower of Mimetic Theory.

"Jesus died to show us what love really is. He died to teach us how to love God and how to love others, and he even empowers us to love our enemies.
This means that Jesus "took away the sins of the world” by showing us how to love the way He loves. Rather than say that the wrath of God was poured out upon Jesus as he suffered on the cross, it might be more accurate to say that our wrath was poured out on Jesus. We killed him."

Maybe we're just looking at this two different ways. There's the atoning work of Christ that deals with all sin once and for all, and the ongoing, daily denying our sin nature and living by His life. To me, you are describing here more of the latter, the daily walking in Christ, and looking to His self-emptying example ultimately displayed in the cross.

Sorry if I went down the wrong trail the first go-through... :-)

I think I have a very smart and discerning cousin. The reason the Eucharist is so important to me is that it is a constant reminder that Jesus died to show us how to love, and every time we receive, we have that message returned to our minds and hearts. John Wesley felt that the Eucharist should be received "as often as is possible" and he received every few days as it was available, occasionally every day. I do not argue such points, but the writer asked what we think, and that is what I think. At my church the Eucharist is celebrated every day at 12:15. Sometimes there are only the Biblical 2 or 3 who gather, sometimes there are 10 or 12, seldom more on any one day, but it is available for those who wish to receive.

Jesus takes away the penalty for being a sinner

Dear Keith,
I am only recently aware of your blog, thanks to a friend's reposting of one of your entries on facebook. I find your understanding of things, your stance, your interpretation of scripture VERY refreshing.
This particular piece, and your notion of what and how our Lord brought about our reconciliation to God the Father was deeply moving to me. I've been (as a "lay-person") delving into theology for the last, oh, two years, and I've looked into various ideas about soteriology (that 50 cent word for what took place in the crucifixion). I find the idea that God poured the acid of His wrath for our sins upon His beloved Son, in a word, repugnant. As the scripture says, God was IN CHRIST, reconciling the world to Himself.
Personally, I am of the opinion that what Jesus did is far more complex, and mysterious, and unfathomable, than any notions of soteriology can ever get its intellectual arms around.
I believe that Christ's life, death, and resurrection are the very hinge of history, the MOST significant event which ever took place upon this podunk planet.
But I wish the emphasis in Christian streams leaned more toward what Christ saved us INTO (the zoe life of God), than what He saved us OUT of, the pangs of hell.
I wish the symbol of our faith was the empty tomb, rather than the instrument of death.
Maybe I'm belaboring my intro. The reason I wished to comment was to make you aware of a rather lovely bit of etymological info I came across some time back, it has to do with the term "passover." Most (including myself) thought it referred to the angel of death passing over the homes of those with the lamb's blood on the lintel and doorpost of their houses. Which marking, strangely enough, makes the sign of the cross. But a bit of philology uncovers the word picture of the term "passover" as the image of a mother bird covering her young with her wings, to protect them from harm. God said, if I remember correctly: "I will passover you." In other words the real meaning is a lovely picture of God Himself behaving like a mother bird, protecting. This, to me, brings light to Jesus tearful statement as he sat on the hill overlooking Jerusalem: "How I would have gathered you, as a hen gathers her chicks, but you would not."
Anyway, hope this finds you well, I am grateful for your wisdom and insight and willingness to put yourself "out there" for the love of God and ALL of humanity.
Bless You Brother,
Michael Paul