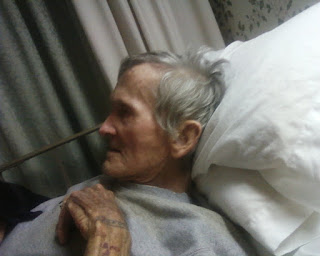 Remembering my friend, Robert Higgins who died on Friday, September 10th, 2010 at 9am.

Robert Higgins was born in Winchester, Kentucky on February 3, 1932 to a poor family. His father died when he was young and for a brief time he and his older brother spent time in an orphanage because his mother wasn't able to provide for them.

One day he and his brother were adopted out to other families and when his mom found out she fought hard to bring them all back together again.

Eventually, Robert moved to California where he worked for the post office briefly and even drove moving trucks for a time.

He met a woman named Rosa and they had two daughters and one son, Richard.

By the time I met Robert, he was estranged from everyone in his family. He was homeless and staying off and on in a motel in Santa Ana.

The more I got to know Robert the more I learned about his struggle with faith. He was angry at God for how his life had turned out. He'd had a hard life and most things hadn't worked out for him the way he had hoped they would.

If there was a theme around Robert's life it was love. He told me once that it was hard for him to receive love from others because in his experience everyone always expected something in return for that love. There were always strings attached, so he learned to mistrust those who acted like they loved him.

Robert's favorite song was "I Want To Know What Love Is" by Foreigner. He only owned one CD when I met him, FOREIGNER'S GREATEST HITS. He never listened to anything else on that collection. Just track one, his favorite song, and then he'd eject the CD and put it back in the case.

The cry of Robert's heart was to know what love is, and he really did want someone to show him if it was real.

About a year ago Robert was diagnosed with bone cancer. He eventually ended up at Fountain Care center just a few blocks away from my house. I used to drop by and see him most days on my way home from work. During our visits he would talk about how so many people in his life used to show him special attention and favor. People at the homeless shelter, barristas at the coffee shops, managers at the motels he stayed at, managers at gas stations where he bought his cigarettes - all of them took special time with Robert and gave him preferential treatment.

"That's God showing you His love, Robert," I said to him. "It's as if God put a spotlight on you and prompted all those people to pick you out of the crowd and show love to you." Robert nodded his head in agreement.

When Robert was admitted to Fountain Care he was placed in room number 316 with a Romanian man who only knew a few phrases in English. The main thing he would say to everyone who entered the room was, "I love you, everyday."

A few weeks ago, before Robert passed away, I pointed this out to him. "Robert, do you know what room number you're in?"

"Yeah. Do you know why God put you in room 316? Because it reminds us of John 3:16 where Jesus says, 'For God so loved the world - that's you Robert - that He gave His only begotten Son, that whoesoever believeth in Him should not perish but have everlasting life.'"

"God also gave you a room mate who can't speak English. All he can say, all day long, is 'I love you, everyday.' Isn't that awesome? God wanted you to be reminded, everyday, that you are loved," I said.

Two weeks ago, one of Robert's good friends at Fountain Care died suddenly. I spent some time that same night reading to Robert out of the book of Romans. I told him I needed to know that he would be with Jesus when it was his time to die.

Since I was always spending time with Robert, many of the people at Fountain Care assumed that I was his son. They would ask me how my Dad was doing, or they'd ask Robert about me assuming I was his son.

About a week ago, as our family was visiting Robert, one of his friends there brought this up and she told my wife that Robert had said that he loved me like a son, and that he wished that I was his son.

Last week, when Robert was near the end, I took his hand and I said, "Robert, God knew that your real son couldn't be here for you the way he wanted to. So, he sent me to be your son and to love you and comfort you in his place. But, God also sent you His real Son, Jesus, to give His life for you and to demonstrate His love for you."

Two days before Robert died, I stood next to his bed. We were surrounded by four other dear friends who had also loved and served Robert in the name of Jesus. We talked and laughed about our memories of being with Robert. We all agreed that we were Robert's family and that we loved him.

The day before Robert died, I sat beside him as he lay quiet. The morphine and the Atavan kept him sedated, but the nurses assured me that he could hear what I was saying. So, I took out his CD player and I played his favorite song. I took his hand and reminded him that God had already shown him what love is. That love had a name and that his name was Jesus.

After I sang a song to him and read Psalm 23, and Zephaniah 3:17 to him, I took his hand and I said,"Robert, will you pray with me?" and I lead him through a prayer of confession and faith in Christ. Of course, he wasn't responsive so I don't know if he really heard me or not.

I prayed that night, as I did most nights, for God to give me some kind of confirmation of Robert's salvation. Just one minute of lucid consciousness with him was all I wanted. Just to know that he had really made peace with God and accepted the love of Jesus. That was my prayer.

The next morning, on September 10th, at 9am Robert passed away in his sleep.

One of the women who had served Robert during all this time was Kathleen. When I called to let her know that Robert had passed away, she told me that she had been praying for Robert and wondering if he had really received the love of Jesus or not. "I felt like the Lord gave me a word about Robert," she said. "He reminded me that all of us who served him did it in the name of Jesus. At first, Robert resisted our love and God's love. Remember how he used to fight us and argue with us? But eventually Robert's heart softened and especially near the end he was very accepting of the love we showed him. He was thankful for it and he received that love of Jesus from us. So, in that way Robert did receive the love of Jesus and I believe he really did have that conversation with Jesus in his heart."

Through my tears I thanked Kathleen for this assurance. I needed it so much.

Robert Higgins, my dear friend, was a man who never knew what love was until some people he never met before began to demonstrate it to him. They all did this because Jesus first loved them and gave Himself to save them. Jesus changed their hearts and filled them with the patience needed to love a cranky, difficult man like Robert, who eventually softened under the endless barrage of God's mercy and grace and love.

Today, Robert Higgins knows what love is. He is looking deep into the face of love and he is full of joy and peace.

I'm so thankful to God that He allowed me to be one of those many, many people who He deputized to demonstrate His love to Robert Higgins. Through this journey with Robert, I also learned what love is and I will never forget this lesson, or this dear, sweet friend.

Email ThisBlogThis!Share to TwitterShare to FacebookShare to Pinterest
Labels: compassion in action, grace and mercy, robert higgins, serving others, the love of Jesus

Keith, I'm sorry that you have lost a dear friend yet rejoice with you that Robert died knowing true love. Thank you for introducing us to him via this blog and for sharing your insights on the journey. I'm challenged and humbled.

I'm sorry for your and the world's loss. What a wonderful way to honor your friend, though!