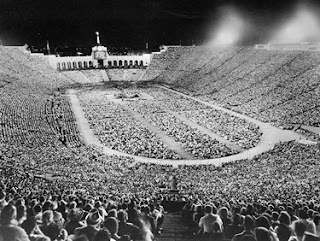 Maybe there’s something wrong with me?

I already know that I don’t quite fit perfectly into the usual American Christian Evangelical mindset. That’s why I blog about things that often get me into trouble, or invite criticisms from those who disagree with my skewed views.

I think I'm also cursed to always see things from a slightly different perspective, and whenever I share that perspective I'm often blasted for it. But, I can't help myself.

Jesus seemed to always be trying to get away from large crowds, not looking for ways to attract more people. Jesus seemed to care more about those one-on-one conversations with lepers, or prostitutes, or outcasts, or women who most people ignored.

Big events don’t move me, and so I guess I tend to assume that they don’t move God either. Maybe I’m wrong about that. Maybe I’m not. I’m just sharing my gut reaction to big-scale events where people equate a trending hashtag with spreading the name of Jesus – especially when that hash tag doesn’t contain the name of Jesus.

The bottom line is that I’m not in the place to judge anyone. I know that. No one needs to clear anything with me before they host a large Christian gathering.

If this event ignites someone's heart to follow Jesus more fully in their day-to-day life, then that's a very good thing.

But, if it leaves us empty after the emotional high is over and people are unable to see Christ in their sometimes mundane reality, it might create a dependence on emotional experiences rather than keeping us focused on the reality of a life-changing daily relationship with Jesus.

I’m just saying that if Revival truly comes to our nation, it will probably be in the quiet solitude of a prayer closet and not up on the Jumbo-Tron screen. At least, that’s where most Revivals begin, historically.

Can God do whatever He wants? Well, obviously. Yes, He can do whatever. And maybe if He really wants to get our attention, He’ll have to show up to one of our stadium events because that’s where most of us are looking.

But typically, God seems to love to do things differently. He seems to prefer to defy our expectations and to upset our status quo.

If nothing else, maybe we should keep our eyes open for Jesus in the unexpected places, off the main stage, outside the coliseums, in a quiet place, with a still, small voice calling out in rooms where no one is recording anything on their iPhone or live-Tweeting the play-by-play.

Revival, for me, is a word for a people whose hearts are broken. A person whose soul is ripped down the middle at the sight of all the suffering that surrounds them.

Revival is essentially a word that calls attention to the reality that something that is dead needs to come alive again.

Maybe we don’t need another revival meeting. Maybe what we need is more like a resurrection.

A resurrection doesn’t have a soundtrack or an official t-shirt.
A resurrection is simply a miraculous burst of life in a dark place.

When people who are hungry for Jesus and moved by Jesus are willing to go out and act like Jesus in a world that is desperate for Jesus, then we can honestly say that we have experienced a resurrection.

I’d love to host a “Let’s Go and Do the Stuff Jesus Did Conference"
where thousands of Christians spread out over the city
and break into groups of five or ten
to visit children’s hospitals
and pray for cancer patients
and give hugs to the homeless
and reconcile with their gay brothers and sisters
and pray a sincere blessing for their President
and repent publicly from seeking to change the culture through political power
and maybe take up an offering to feed the poor and house the mentally ill who sleep on our streets every night.

Now, that’s the kind of revival I can get excited about, and it just might deserve to go viral on Twitter, too.

What do you think?
-kg

Hi Keith. I have posted one comment already but I don't think I completed it right so I am trying again. I have to say that I too am not over enthusiastic about big events. Much prefer the idea of us being Jesus where we are and changing the world one life at a time. I am sure there are enough believers around the place so that if everyone did this there would be revival and personal resurrections and reality in people's lives. Bless you. Mick from Romford in East London in the good ole UK!!

That exactly expresses what has been on my heart the last couple of days.

The title of your post makes me think of Jesus' statement "I am the way, the truth and the life." That's the same as Jesus saying "I am love, light, and life." He is the image of the invisible God, firstborn of all creation.

When the light of Christ shines on the love of Christ it produces the life of Christ.

It's the same thing as Peter saying "Repent and be baptized for the forgiveness of sins and receive the Holy Spirit. Peter is saying receive Jesus' light, Jesus' love, and Jesus' life.

I want to be a part of conference like you described.

I couldn't agree more. I think when we try to force something to happen or try to manipulate God into doing something for us ("perform on command" as you succinctly put it), then there are no real results. When we humbly do the right thing in smaller matters, I think that God brings results. I find it difficult to fully articulate, but that's my perception. It seems that throughout history, God has always used innocuous and seemingly insignificant things to bring about the greatest healing.