The New Jerusalem Has Already Come Down 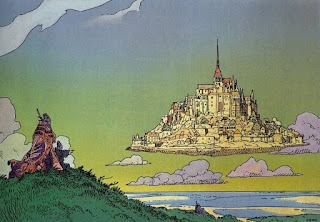 “Then I saw a new heaven and a new earth, for the first heaven and the first earth had passed away, and the sea was no more. And I saw the holy city, new Jerusalem, coming down out of heaven from God, prepared as a bride adorned for her husband.” [Rev. 21:1-3]


John kicks off this chapter by declaring that the New Jerusalem – which is the Bride of Christ – has come down from heaven in fulfillment of the promise that “The dwelling place of God” would be “with man” and that God “will dwell with them, and they will be his people, and God himself will be with them as their God.” [Rev. 21:3]

I know that many are tempted to read this passage – and certainly this entire epistle of John – as if it were entirely futuristic. But there are some problems with that, I think. Especially when it comes to the New Covenant, which the prophet Jeremiah foreshadowed and Jesus proclaimed as being inaugurated on the night before his crucifixion at the final Passover supper with his disciples.

“For this is the covenant that I will make with the house of Israel after those days, declares the Lord: I will put my laws into their minds, and write them on their hearts, and I will be their God, and they shall be my people.” [Hebrews 8:10]

Keep in mind, the old city of Jerusalem which existed at the time of Christ, and before John wrote Revelation, was destroyed in AD 70. Its destruction was the “End of the Age” and when it was destroyed, so was the Old Covenant system.

Out of the ashes of that temporal city arose the new spiritual Jerusalem, and with the destruction of that Old Covenant Temple there was constructed a new, living Temple of the New Covenant, which is the Church.

Later in the chapter, John says:

“Then came one of the seven angels who…spoke to me, saying, ‘Come, I will show you the Bride, the wife of the Lamb.” And he carried me away in the Spirit to a great high mountain and showed me the holy city Jerusalem coming down out of heaven from God, having the glory of God…” [Rev. 21:9-11]


The Church is the Bride of Christ, and as John tells us in Revelation, the New Jerusalem has already come down from Heaven [by the power of the indwelling Holy Spirit] and now grows to cover the entire earth.

Then John goes on to say:

“And I saw no temple in the city, for its temple is the Lord God the Almighty and the Lamb. And they city has no need of sun or moon to shine on it, for the glory of God gives it light, and its lamp is the Lamb. By its light will the nations walk, and the kings of the earth will bring their glory into it, and her gates will never be shut by day – and there will be no night there. They will bring into it the glory and the honor of the nations. But nothing unclean will ever enter it, nor anyone who does what is detestable or false, but only those who are written in the Lamb’s book of life.” [Rev. 21:22-27]

Within the Church – or the New Jerusalem – there is no temple other than Jesus Himself. He abides within us, and we abide within Him. We are the living Temple of the Holy Spirit where Christ lives, and Christ is the living Temple where all of us “live and move and have our being.”

Christ is our light, and because of this, we are the light of the world.

The Bride of Christ is here now. We are the Incarnation of Christ in the world now. He is our Head, and we are His Body.

“And I heard a loud voice from the throne saying, “Behold, the dwelling place of God is with man. He will dwell with them, and they will be his people, and God himself will be with them as their God.” [Rev. 21:3]

Has God not made His dwelling among men? Isn't this what Jesus, and Stephen, and the other Apostles proclaimed over and over again?

The New Jerusalem has already been planted like a seed on the earth. Now it continues to grow daily, and the Lord is adding to Her number daily, as His Kingdom advances and His rule and reign expands.

“For to us a child is born, to us a son is given; and the government shall be upon his shoulder, and his name shall be called Wonderful Counselor, Mighty God, Everlasting Father, Prince of Peace. Of the increase of his government and of peace there will be no end, on the throne of David and over his kingdom, to establish it and to uphold it with justice and with righteousness from this time forth and forevermore. The zeal of the Lord of hosts will do this.” [Isaiah 9:6-7]

Email ThisBlogThis!Share to TwitterShare to FacebookShare to Pinterest
Labels: REVELATION, THE BODY OF CHRIST, the bride of christ, the ekklesia, the new jerusalem

There is something that doesn't match to me... We are the body and also the Bride? That means Christ Is marring him self

The church is the Bride.