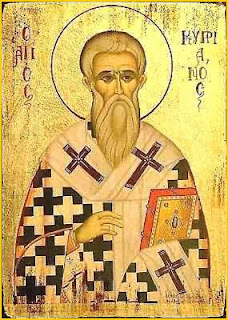 For most of his life, Cyprian was a distinguished and wealthy pagan who lived in a luxurious villa which sprawled across much of the hillside of Carthage where he was born, in the late 3rd century.

Born Thascius Cyprianus, he later took the name Caecilius in memory of the man who introduced him to the Christian faith. Due to his great wealth and influence in the pagan community, Cyprian was ordained as a deacon in the Christian church soon after his baptism and in very short order he was named as Bishop of Carthage, to the protest of many of the faithful in that region.

In spite of the very vocal opposition to Cyprian's fast track to Bishop-hood, which continued to plague him throughout his tenure in that office, his talents as a pagan orator and teacher of rhetoric, along with his great wealth, afforded him great influence within the 3rd century Christian church.

ON THE RUN
Early in his career as Bishop of Carthage, Cyprian was ordered to offer sacrifices to the Emperor or face persecution. He fled to a secluded village and maintained contact with the Church via an appointed contact. As more persecution came upon the members of his church, many others fled as well. However, Cyprian felt very strongly that the Church should not welcome back those Christians who escaped the sword by running away, as he had done. Instead he argued that they should be treated as unbelievers and not be welcomed back into fellowship.

Of course, when he eventually returned from hiding to resume his public office, he wrote a compelling letter explaining why his escape into seclusion was for the strengthening of the Church and that he should, therefore, be allowed to continue as Bishop of Carthage. None of the other Bishops opposed his return to his diocese and he was allowed to continue as if nothing had transpired.

RE-WRITING THE NEW TESTAMENT
Cyprian's greatest influence on the Church was introducing the concepts of priest, temples, rituals, altars and sacrifices to the faith. Until his writings, the Christian church had operated under the New Testament system, largely influenced by Jesus and his Apostles, which held firmly to the notion that the temple, the priesthood and the sacrifice were fulfilled in Christ at His Crucifixion and further that His Followers were also the temple of God, the royal priesthood and that their sacrifice was expressed in the way they lived their lives each day.

Because of Cyprian's skill as an orator and his prominence as a Bishop in Carthage, his pagan ideas of worship were given serious acceptance within the larger Body of Christ. In his writings Cyprian argued for a return to Old Testament Jewish practices which closely mirrored the concepts he had grown up with in a paganized culture.

Sadly, the Christian faith adopted Cyprian's ideas of spiritual covering, the special clergy caste, the importance of ritual and the need for a temple and sacrificial system of worship within one generation, effectively undoing the revolutionary concepts of Church found in the New Testament.

THE CHURCH JESUS BUILT
Inspired by Jesus, the Apostles established a community of believers; a church, based on the revolutionary concept of People-as-Temple and a corporate body which depended not upon a special clergy class, but upon the Holy Spirit Himself.

"...the Counselor, the Holy Spirit, whom the Father will send in my name, will teach you all things and will remind you of everything I have said to you." - Jesus (John 14:26)

Under this radical new concept, the Church was built upon the foundation of Christ as our ultimate priest and sacrice and temple so that each of His followers could also become a temple of the living God, a daily sacrifice and a priest of God.

No one was more vocal about this concept of a living temple of God than Paul the Apostle who wrote prolifically on the subject in nearly every single epistle.

"Don't you know that you yourselves are God's temple and that God's Spirit lives in you?" 1 Cor 3:16

"Do you not know that your body is a temple of the Holy Spirit, who is in you, whom you have received from God? You are not your own." 1 Cor 6:19

"What agreement is there between the temple of God and idols? For we are the temple of the living God. As God has said: "I will live with them and walk among them, and I will be their God, and they will be my people." 2 Cor 6:16

"Consequently, you are no longer foreigners and aliens, but fellow citizens with God's people and members of God's household, built on the foundation of the apostles and prophets, with Christ Jesus himself as the chief cornerstone. In him the whole building is joined together and rises to become a holy temple in the Lord. And in him you too are being built together to become a dwelling in which God lives by his Spirit." - Eph 2:19-22

THE TESTIMONY OF PETER
Peter himself was also very clear on the concept of a living temple made up of people who were also the new priesthood and the daily sacrifice.

In his first epistle he clearly outlined this very concept to those early Christians:

"As you come to him, the living Stone—rejected by men but chosen by God and precious to him— you also, like living stones, are being built into a spiritual house to be a holy priesthood, offering spiritual sacrifices acceptable to God through Jesus Christ." 1 Peter 2:4-5

"But you are a chosen people, a royal priesthood, a holy nation, a people belonging to God, that you may declare the praises of him who called you out of darkness into his wonderful light. Once you were not a people, but now you are the people of God; once you had not received mercy, but now you have received mercy." - 1 Peter 2:9-10

THE CYPRIAN SWITCH
Sadly, in the third century, Cyprian came on the scene and unraveled the tightly woven tapestry spun by Jesus and taught by His Apostles in the New Testament by someone who clearly did not fully understand the genius of this design.

Jesus himself spoke clearly on this subject when asked by the woman at the well about the location and method of proper worship to God. His response was that the temple in Jerusalem was no longer the "special" place to find God. Instead, one could find and worship God wherever they stood, as long as God's Spirit was within him or her.

The very fact that the early followers of Jesus did not adopt a system of priesthood, or continue to offer daily sacrifices in a special temple bears witness to the fact that, as evidenced in the Apostolic writings, there was a new temple, priesthood and sacrifice now, and they were it.

Under Christ, the priesthood was now more than just one man overseeing a congregation of several hundred people, the priest was now every single one of those people. It was an exponential multiplication of priests who were also temples of God's Holy Spirit where a daily sacrifice of will and self took place.

"Therefore, I urge you, brothers, in view of God's mercy, to offer your bodies as living sacrifices, holy and pleasing to God—this is your spiritual act of worship.
- Romans 12:1

"Then (Jesus) said to them all: "If anyone would come after me, he must deny himself and take up his cross daily and follow me. For whoever wants to save his life will lose it, but whoever loses his life for me will save it." - Luke 9:23-24

JUST IMAGINE
When Cyprian used his influence to undermine the New Testament and introduced his own ideas about temple, priest and sacrifice, he effectively introduced a virus into the Church which continues to pervade our concepts of worship and church to this very day and hour.

But, what if we could return to the ideas of the New Testament? What if we could learn to live as if God's Holy Spirit lives within every single follower of Jesus? What if we could begin to think of ourselves as priests of God who daily offer themselves as living sacrifices so that Christ could live through us?

Email ThisBlogThis!Share to TwitterShare to FacebookShare to Pinterest
Labels: CYPRIAN, EARLY CHURCH, ekklesia as God intended, Priesthood of the Believer, the priesthood of all believers

There are two sides to this story ...
http://orthodoxinfo.com/death/cyprian_justina.aspx

Leave it up to humans and things get all screwed up

I remember this article from about eight years ago now. It was an important catalyst for my beginning to change my thinking on this subject of church.