Guest Post: The Gospel In The Shell by Vilbert Vallance 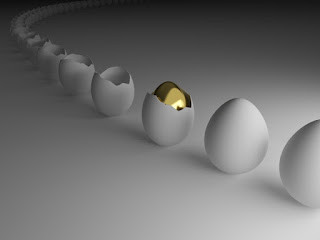 NOTE: This post was sent to me by my friend, Vilbert. He is Indian and works as a chaplain for the Baptist Hospital in Bangalore. This is a wonderful testimony of how he shared the Gospel with a man who was dying.

*
Two days ago I was sitting beside a man who is in his 40’s and a palliative patient. [Similar to hospice care]. He was in good sense, was strong enough to speak, think and even to reflect. I was happy that the whole conversation was in our language, and the setting was a village.

I had to tell him the reality of Heaven and Hell, but I didn’t know how to start and make this important subject simple for him to understand.  Then, I noticed little chicks running across muddy and dusty path in front of his house.

I said, “Look Mr. Narayanapp. Look at those little chicks. If a little chick in the egg were to declare that nothing existed outside the egg, and its mother were to reply, “No. In the outside world there are mountains, flowers, rivers, blue sky”, the little chick might reply “You are talking nonsense. I can’t see any of these things.” But when the shell breaks suddenly, then the little chicken would see his mother was right!

I continued, saying, “It is same with us. We are still in the shell. We see neither heaven or hell. But one day our shell has to break and then we will see.” He kept nodding his head and even started to think. Rather, he started to think deeply by closing his eyes.

I said, “Mr. Narayanappa, you see in the shells the little chick has eyes and wings. That itself is a proof he would be needing those in the future. Eyes are created to see, but since it’s still in the shell, it thinks there is nothing to see. It has wings that are created to fly, but it can’t because it is in a shell.”

I said, “In the same way, we have many desires and longings which can never be satisfied here. There must be some way to satisfying them. This opportunity is Eternity. Just like little chick needs to be kept warm as long as he is in the shell, we need to be kept warm. This surety of eternal life is given to us when we confess our sins before the Lord Jesus and invite him to come into our life and heart. He will come and gives us Eternal Life.”

“Look how these little chicks are running with energy, freedom, and a sense of joy all the time,” I said. “They are also aware that their mother is watching them closely. And God watches us when we surrender to Him.”

Oh, this made a lot of sense to this man, and I led him to the Lord.