Who God Really Is 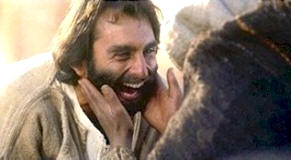 Last night I met with a young man who asked some really great questions.

First, he asked me how we know that our perception of God is really who He is and not a projection of God that we’ve created in our own mind.

My response was to say that we have to begin by deciding in advance that we want to know God as He really is, regardless of what our preconceptions might be.

Then he said, "It's kind of scary to connect with God - for real - knowing that I might not like who He really is."

And that led us to talk about the differences between the Old Testament God, who seems to be so vengeful, and the version revealed by Jesus which appears to be much more merciful and loving.

What I told my friend was this:

"The clearest picture we have of what the Father is like is revealed by Jesus, who said, "If you've seen me, you've seen the Father." Without Jesus there is a veil that covers our eyes when we read the Old Testament, and it's only taken away by Jesus. [2 Cor. 3:14-15] So, if we want to know who the Father really is - and what God is really like - we look at Jesus, not at the metaphor and the shadow of the OT, but at the "exact representation of God’s nature" [Hebrews 1:3], that we see in Jesus who is "Emmanuel, or ‘God with us’."

This conversation was held during one of our “Jesus Without Religion (Or Politics)” meetup groups.  So far we’ve had two meetings each week – one for Christians and for Non-Christians – and both have been attended by just one person each.

On the way home from our meeting last night, Wendy noted something wonderful. She said, “It’s so cool that God knew that these two young men needed to know who He was and he prompted you to set up these groups so we could sit with them and help them to see who Jesus is.”

That is pretty cool, isn’t it?

If you think of it, please pray for these two meetings, and for both of these wonderful young men who are continuing to understand who Jesus is and how much He cares for them.

Aloha Keith...just got thru praying 4 both of your groups. I think its beautiful that you Share Jesus with Both Worlds. I think the real blessing comes when you can relate who He is by being who you are. As for me ... I've tasted the lips of the Son and can never be the same again.... It's in this intimate relationship that Christ Jesus continually reveals himself to me. Many times it's in the little things that He speaks to me annnd I cherish these times the most. Sometimes, I pause and wonder How & Why Jesus Loves man so much - Psa 8: 3-6

Yes it is very cool--what about that girl Kaylee?

I love how you go beyond church as usual, Keith, to be a light where the needs really are!