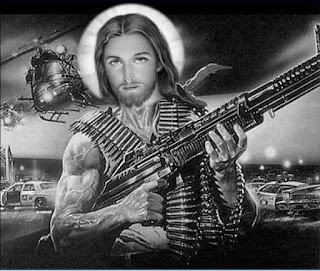 This gun issue is very simple for me it's pretty cut and dried:

1) Jesus wouldn't carry a gun. He for sure wouldn't carry or keep it with the intent of harming another human being. That wasn't his thing, and so it shouldn't be ours. The harming of another human being is antithetical to what it means to be a Christian.
The earliest Christians got this. We don't have a single document that supports the taking of life for the first 300 years of the church. Three hundred years! Where did we go so far astray?
(I could stop here, but...)

2) Every explanation I see of why we should have and carry guns is rooted in some type of fear - literally every one. When (if) you said yes to Jesus your worldview was to change. You are not promised a country or safety or that bad or even horrible moments wouldn't come. You WERE promised that he would never leave you or forsake you. You were promised peace that passes all understanding. You were promised that what is in Christ is greater than what's in the world. You were promised a cross, but you were also exhorted over and over again to "fear not."
Fear is killing us folks.
Real freedom is the release of fear.

3) The 2nd amendment when used to defend present day ideas of gun ownership is taken completely out of context and doesn't even really make sense. If we used the same logic and methodology with the Bible, we would have some crazy beliefs.

5) Global statistics prove #4 and that we are in the wrong or that we are behind on this issue in so many ways. Other developed countries simply don't have this problem.

6) I highly recommend the writing of David Gushee. His work along with the work of Greg Boyd and Glen Stassen are clear, compelling, and concise on these topics.

Some of the questions this introduces have simple answers in my opinion. For example, if I even think there MIGHT be a hell, how can I possibly risk sending somebody there just to save my own life? For my father, who believed God might someday send him to preach the gospel to the Koreans the question was "how can I kill one of them and then return and preach salvation to that man's relatives?" and so he went through the entire war with an unloaded weapon. Sometimes I wonder if we ask the right questions.