The Parable Of The Unmerciful Nation 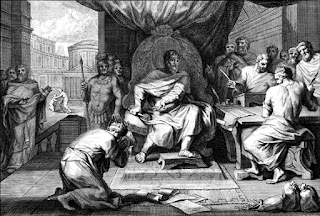 Transposing Jesus' Parable of the Unmerciful Servant (Matt. 18:23-35) into our time, produces the following reading:

Compare the Kingdom of God to a financial lord who wished to settle accounts with his debtor nations. When he began reckoning, they brought to him one who was the President of a Nation that owed him three trillion dollars - the United States. And as the nation could not pay, the lord ordered that austerity measures be adopted by its government. Henceforth, all government services were to be cancelled, millions of employees were to be dismissed, and all health, welfare, and social security payments were to be suspended until the United States could pay their debt. Every available resource was to go toward mounting debt-service payments.

So the President of the United States fell on his knees before the financial lord, imploring him, "Lord, have patience with us, and we will pay you everything." And out of pity for him and his people, the lord of that president released him and forgave him the debt.

But that same president, as he went out, came upon the president of a small African country that owed the United States 100 million dollars. Seizing him by the lapel, he said, "Pay what you owe." So, his fellow president fell to his knees and besought him, "Have patience with us and we will pay you everything." But he refused and his economic advisors forced austerity measures on the African country, whose people died of malnutrition while their own resources were used to service the debt.

When the presidents of the other debtor nations saw what had taken place, because of their great distress they were moved to solidarity. And they went and reported to their financial lord all that had happened and their resolve to stand together: "We shall not pay our foreign debt with the hunger of our people."

Then the lord summoned the president of the United States and said to him, "You stupid man. I forgave you and your people all that debt because you besought me; and should not you have had mercy on your fellow president, as I had mercy on you? Look what you have done now! Those nations are in solidarity, and all of us who have held them in debit will be ruined!"

And in anger the lord delivered him and his nation to austerity measures and a great depression, and both the president and the lord then fell from wealth and power.

The world's largest debtor nation is not Brazil, or Africa. Nor is it any of the other third world countries whose people are being starved by the austerity measures imposed by the International Monetary Fund.

The greatest debtor in history is the militarily most powerful nation in history - the United States of America.