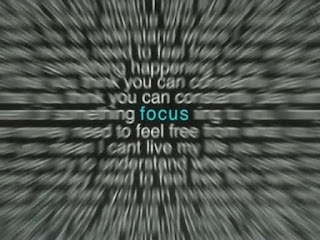 There’s almost nothing worse than being in a movie theater where the projectionist isn’t paying attention and you have to scream, “Focus! Focus!” to get them to adjust the picture.


That’s how I feel when I listen to most Christians talk these days. They’re technically correct, but focused on the wrong ideas.


For example, earlier this week I received a message from someone who wanted to know my opinion about gay marriage. Beyond the “right or wrong” aspect of her question was a deeper reality. Her friend had walked away from church over feelings of rejection from her Christian leaders.


Can we identify the behaviors that are categorized as “sinful” accurately? Most certainly. In fact, we’re very, very good at that in the Body of Christ. We can go to verses like 1 Corinthians 6:9-10 and read:


The scriptures are pretty clear about who does, and who doesn’t, make it into the Kingdom. But what do we do with that information? Do we go to our co-worker who isn’t a believer and place our hand on their shoulder and inform them that they are a sinner and that because they get drunk on the weekends that they will not be accepted by God? Or do we go to our neighbors and knock on their door and say, “Hello, I just wanted you to know that since you’ve been married more than once, you are an adulterer and God won’t allow you to enter His Kingdom.” Hopefully not.


But when our first thought about homosexuals is to proclaim that they are sinners and to inform them that this disqualifies them from entering God’s presence, that’s exactly what we’re doing. It’s sort of a reverse evangelism. We wouldn’t go out into the world and start separating all non-believers into various categories of sin in order to condemn them, would we?


Not only is this wrong-headed, it’s actually non-biblical. By that I mean, we do not ever see the Apostles or the early Christians going out to identify all the sinners around them. They did not say, “Hey you greedy drunkards, you’re not welcome in the Kingdom of God.” Instead, what we see time and again is the proclamation that the Kingdom of God is available, and wide open to people just like those "sinners".
When Paul stood before the Athenians he did not condemn them as evil sinners because of their idolatry (something he specifically identifies in 1 Cor. 6 as sinful). Instead, Paul takes the time to commend them for their religious zeal! He then tells them how wonderful God is, and how they can get to know Jesus who has risen from the dead. No mention of condemnation for their sins, just an appeal to their desire to know the truth about God and an opportunity to meet Jesus personally.


Most of us, I believe, wouldn’t dream of saying to an unbelieving co-worker or friend, “Hey, you’re a sinner and that means you can’t enter God’s Kingdom.” But when we walk around proclaiming that homosexuality is a sin and that those who practice this are going to hell, that’s exactly what we’re doing. Are we factually correct? Yes. Are we right? No. Because Paul’s statements in 1 Corinthians 6 were made to Christians, not to unbelievers. And notice how he finishes that statement about who will not enter the Kingdom of God:


“And that is what some of you were. But you were washed, you were sanctified, you were justified in the name of the Lord Jesus Christ and by the Spirit of our God.” (v.11)


See? The people he was writing to were formerly sinners themselves. He is reminding them of how far they have come. Why? So that they will not be tempted to look down on “those sinners” over there, because all of them were once in the same condition.


Our posture towards those outside the Kingdom of God should be to love them, to befriend them, to have them over to dinner, to bless them in the name of Jesus. Whether they are drunkards, or adulterers, or liars, or greedy, or homosexuals, or whatever, we should take the time to get to know them, and to love them, and to wait for the opportunity to share the love of Jesus with them so that they can see that God loves them and that His Kingdom is wide open to them whenever they are ready to follow Him.


Isn’t that what Jesus did for us when we were sinners? Didn’t he welcome us? Didn’t he love us? Didn’t he overlook our sins in order to show us what life with him could be like if we would simply take his hand and follow him?


It’s the kindness of God that leads to repentance. Our role is to love people into the Kingdom. If we go out proclaiming that everyone else is a sinner and that the pathway to Jesus is closed to them, what’s the point? Instead, let’s go out proclaiming the goodness and mercy of God towards everyone, admitting that we are sinners too. Let’s invite people to know Jesus personally so that He can transform them into His image as they learn to trust Him daily.


There’s nothing worse than being unable to see the big picture because we’re distracted by the wrong things.

helpful reminder in focus!
Do we considered how often people are assumed to to Christians, and that many are being singled-out for a sin category rebuke by way of this presumption? In many places still, Americans are often assumed to be Christians (while people of unlike nationalities and cultures less so). Unhelpful evangelism in reverse occurring by way of mistaken identity?

Our posture towards those outside the Kingdom of God should be to love them, to befriend them, to have them over to dinner, to bless them in the name of Jesus. Whether they are drunkards, or adulterers, or liars, or greedy, or homosexuals, = a pile of condescending claptrap. Sorry, but you lost me there.

Modern Christianity is not concerned with the core of our religion (they will know you are my disciples by the LOVE you have for one another) as much as we are the newest trend or movement being promoted as the right way.

I have always wondered how Paul won so many to Christ in his lifetime. I have thought many times of Paul's words " I have become all things to all people so that by all possible means I might save some". That pretty much agrees with what you are trying to say. Those that are lost need someone to care and that loves them.

Br G-M: Have you not heard Jesus say, "If you only love those who love you what credit is that to you? Don't even tax collectors do that?"

Our calling as followers of Jesus is to love everyone - especially those who do not love us, or God.

Why? Because that's what God does! Jesus makes his appeal to us to love our enemies on the basis of the fact that God the Father loves His enemies.

I beg you to reconsider.

thank you, keith
this is a growing issue and we need clarity and truth to be spoken righteously. the world's way of thinking rarely considers the true wisdom of God. God's judgement is applicable for all generations. We generally in or own skin are thinking of just one generation (ours)...without considering history or future.

I feel one of our major challenges on both sides of this issue comes form categorizing. Once we place a label on the behavior we begin to see the person as a problem to fix or as a commodity to use, rather than a person. We are social beings who need to know we are seen for who we are not as some commodity to be used, or problem that needs to be fixed. We all need to be seen, heard and touched for who we are before we can even begin to believe we are Loved. Lord I pray that you open our eyes to see each other as you see us, to open our ears that we may hear the cries you hear, and inspire us to touch each other as you touched us. In Jesus precious name, may Your will be done and your Kingdom come on earth as in heaven. Amen