THE WORD OF GOD IS A PERSON. 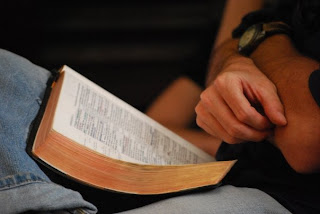 When we read about “The word of God” in the new testament, this isn’t usually a reference to the Bible or to scripture but to a person who is known as “The Word of God” or Jesus, the Messiah.

There are a few references where Jesus talks about the Old Testament scriptures as “the word of God” but those are the minority. Often, the term “word of God” is used to describe the sharing of the message of the Gospel, but in many instances the term is used to talk about a person, not a book that (at that time) had not been written yet.

This verse, obviously is equating the "Word of God" with God, but then we read:

“The Word became flesh and made his dwelling among us. We have seen his glory, the glory of the one and only Son, who came from the Father, full of grace and truth.” (John 1:14)

Now the "Word of God" is being identified as someone who became flesh and made his dwelling among men, namely, Jesus.

These verses below are also examples of the phrase "Word of God" being used in reference to a person (Jesus):

“Then faith comes by hearing, and hearing by the Word of God.” (Romans 10:17)
In this verse, the "Word of God" can't mean "the Bible" because it wasn't written yet. At least, not the parts being referred to here (i.e. "the Gospel").

“For the word of God is alive and active. Sharper than any double-edged sword, it penetrates even to dividing soul and spirit, joints and marrow; it judges the thoughts and attitudes of the heart. Nothing in all creation is hidden from God’s sight. Everything is uncovered and laid bare before the eyes of him to whom we must give account.” (Hebrews 4:11-13)

Probably the most overly quoted verse about the "Word of God" and usually in the context of written passages (the Bible) instead of what it was meant to - a person (Jesus).

Jesus is "alive and active". Jesus "penetrates even to dividing soul and spirit, etc." Jesus is the one who "judges the thoughts and attitudes of the heart." A book can't do those things, even a book as awesome as the Bible.

Again, the "word of God" that lives in you and me is not a book. It's a person and that person is Jesus.

“When he opened the fifth seal, I saw under the altar the souls of those who had been slain because of the word of God and the testimony they had maintained.” (Revelation 6:8-10)

People were not put to death because of the Bible. They were persecuted for faith in the person of Christ, who is the word of God.

In case there was any doubt, we are told that Jesus' name is "the Word of God." We also see that John, who writes the most about this subject, affirms that he is exiled for his faith in Jesus, not because of a book that hasn't been written yet:

“I, John, your brother and companion in the suffering and kingdom and patient endurance that are ours in Jesus, was on the island of Patmos because of the word of God and the testimony of Jesus.” (Revelation 1:8-10)

So what? You might ask. Why does any of this matter? Because the apostles wanted us to understand that it was important to have a relationship with a person named Jesus, not with a book that they were in the process of writing down.

Jesus even warns us not to fall in love with a book, even with the Scriptures:

"You search the Scriptures, because you think you will find eternal life in them. The Scriptures tell about me, but you refuse to come to me for eternal life." (John 5:39-40)

The Word of God is a person. His name is Jesus. Get to know Him.

Email ThisBlogThis!Share to TwitterShare to FacebookShare to Pinterest
Labels: jesus is the word of god, life in christ, search the scriptures, the word of god is a person

:) Love seeing this post. I've shared this same concerns with others - but haven't gotten much positive feedback.
One way I've reconciled the references to "Word", or "Word of God" that may refer to written words as well is this: If we subsitute "Word" with "Message" it sometimes helps. It may not be as much about the medium, but the source of the message, and what the message is. So yes, Jesus is a message to us of God, and there have also been many other messages from God that have been recorded by men of God and written in our collection of books. If someone wanted to say the Bible is a message from God to us, I likely wouldn't make a fuss.
But since the terms "Word" and "Word of God" most often refer to Jesus - I'd rather reserve those terms for the personal message we have been given.

When we contact the Word, we need to be clear that we are contacting God Himself. Whenever we open the Bible, our first thought should be to contact the living God. The living God has breathed out all that is within Himself as the Word. All the riches within Him are breathed out in the form of the word. Every word of the Bible, from the first to the last, is the breath of God. The Bible is not for us to study philosophy or literature. It is for us to contact what God has breathed out, what He has exhaled.

Brothers and sisters, this is not a light matter. Unless we have the concept that we are coming to God and contacting Him, our focus will be wrong. The first thought we should have, the first step we should take, when we open the Scriptures is to prepare ourselves to contact God. We are reading what God has breathed out. God has breathed His breath upon these words. We should not have the thought that we are reading teachings or literature. Rather, we are altogether contacting the manifested God, the God who has revealed Himself through His speaking. The God who dwells in unapproachable light, who cannot be touched or known, has revealed Himself through the Word. In fact He Himself is the Word, and He is embodied in the Word. Now He has put the Word, which is His breath, before us. When we study the Word, contact the Word, we are actually contacting God Himself.

"What speach is to thought, so is Christ to the invisable Father. He is the manifestation of the father, and is called the Word of God." Ellen G. White

Good article. We so quickly forget that the Word of God is so plainly shown to be Jesus. It is so easy to think of the Bible when we talk about the word of God, and many of us make the Bible a sacred, holy book, making more of it than we should. I like to think of the Bible as the words of God, who inspired men to write what is contained in it, but we need to remember that the living, all powerful, inerrant Word of God is Jesus. He lives within us by the Holy Spirit, meaning the Living Word is within us, speaking, teaching, leading even if we don't have access to the Bible.

I agree that He is the Logos from God, much more than written word, but do you infer that the Bible is not inspired, or that it should not be used has the main source to understand who Jesus is?
Should we not consider the written words? Should we use our human understanding instead?
What should we use as a plumbline? our intellect?

Keith, this post articulates what I've been thinking for years. Rock on bro! :-)

Good article. I couldn't say it any better. Thanks for posting.