FOLLOW JESUS AND JOIN THE SCUM OF THE EARTH 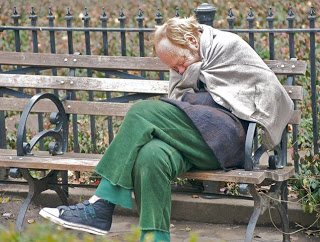 “To this very hour we go hungry and thirsty, we are in rags, we are brutally treated, we are homeless. We work hard with our own hands. When we are cursed, we bless; when we are persecuted, we endure it; when we are slandered, we answer kindly. Up to this moment we have become the scum of the earth, the refuse of the world.” - 1 Corinthians 4:11-13

What does it mean to identify oneself with Jesus? In this passage, Paul paints a pretty stark picture of the Apostles as one’s who are dishonored, poor, weak and foolish. Then he goes further to describe himself and his fellow Apostles as hungry, thirsty, in rags and homeless.

Didn’t anyone explain to Paul the power of positive thinking? Why isn’t he using his faith to pray for riches and a new chariot? Why doesn’t he ask for an offering to be made so that he and the other Apostles could enjoy the finer things in life? I thought that Jesus wanted all of us to be rich? Yet, somehow, Paul and the other Apostles appear to be weak, humble, hungry and homeless.

Even more, what if our high-powered Christian teachers, authors and celebrities today identified themselves as the “scum of the earth, the refuse of the world”? One obvious change would be that they might beat others to the punch, of course. But greater still, how wonderful would it be if it were literally true that our leaders were on the bottom lifting everyone else up?

Can you imagine how powerful it would be if even half of our Christian leaders actually took the yoke of a servant and made themselves nothing in order to identify with Christ and demonstrate the power of humble service to others? Wouldn’t it be amazing if we could point to men and women of God who willingly sacrificed their own comfort and fame and power and position to empower their brothers and sisters in Christ?

In a recent article, Jon Zens questioned whether or not we can even fully comprehend the new testament, and the writings of Paul especially, apart from taking into account the suffering which he and the early church endured. He says:

“Paul wrote out of the context of anguish, tears, rejection by others, physical infirmity and imprisonment. Are we not deceiving ourselves to suggest that Paul’s writings can be properly handled outside of a cross-bearing atmosphere? Can hermeneutics be healthy in an environment where the interpreters are on “flowery beds of ease”? I doubt it.” – Jon Zens, From the article “Is Cross-Bearing A Precondition For Hermeneutic Activity?”

I think that, not only do we need to acquaint ourselves with suffering and cross-bearing to understand the New Testament, we also need to practice these things if we’re going to fulfill the New Testament and the commands of Christ.

“To this we were called, because Christ suffered for us on the cross, and His life was an example for you, we should follow in His footsteps.”-1 Peter 2:21

A good friend recently read through a few of my older articles and caught me referring to myself as “the pastor of The Mission”. It helped me to see how my understanding of Church and leadership has evolved over the last few years, and yet how far I still have to go when it comes to being a servant leader in the Body.

Over the last several months I have managed to fade into the shadows at our House Church in many ways. It’s exciting to see how others step forward and take ownership as I drop back. But as I become more superfluous to the ongoing life and health of the Body I find my interest fading as well. Being “just another member in the Body” has been more challenging than I ever imagined. Suddenly no one needs me to function. I am no longer the source of direction or wisdom. As we lean more on one another, and especially as we learn to surrender to the Lordship and leadership of Jesus, my role becomes more and more ordinary. I’ve never really considered the implications of fostering a true “priesthood of believers” in our Body, and now I can see that it forces me to humble myself in ways I never imagined.

Can I learn to lead others from the background – or from the bottom? Can I step into the shadows and shine the spotlight on them? Can I be the sort of leader that Jesus was, and that Jesus calls me to be in the Body of Christ? I’m not sure. It’s one of those questions that I never expected to have to answer, and it makes me realize that, once again, I am an absolute beginner in all of this. I know nothing.

“Do nothing out of selfish ambition or vain conceit, but in humility consider others better than yourselves. Each of you should look not only to your own interests, but also to the interests of others. Your attitude should be the same as that of Christ Jesus: Who, being in very nature God, did not consider equality with God something to be grasped, but made himself nothing, taking the very nature of a servant, being made in human likeness. And being found in appearance as a man, he humbled himself and became obedient to death—even death on a cross!” – Philippians 2:3-8

To this point it’s nothing short of a miracle that the Mission House Church has survived my ego thus far. Time and again God reveals to me that I am still carrying the baggage of the old, traditional, man-made Church with me, even as I do my best to avoid it. The truth is that I am still far away from embracing the badge of honor that Paul claims for himself when he declares that he is the “scum of the earth, the refuse of the world”. I only hope that one day this could be truthfully said of me as a leader who lifts others up from the bottom.

Email ThisBlogThis!Share to TwitterShare to FacebookShare to Pinterest
Labels: following Jesus, love in action, Telling the Truth about myself and learning to walk in humility with God

Where is the "thumbs up" button? Oh wait, I've confused my online mediums again...

It's incredible how even just one little line, even apart from the rest of the verses, can be such a massive challenge if we start taking the words seriously;

"Do nothing out of selfish ambition or vain conceit..."

Definitely easier said than done, and it would seem that this internal kind of "suffering, this letting go of the limelight, is possibly the most difficult kind there is...

Thank you for being so honest about what it's been like as you've stepped out in obediance, and for sharing about all these sorts of unexpected struggles that we will all inevitably be faced with if we are serious about letting Jesus be the King of His own Kingdom. It is important that others in the Body get to hear this stuff, because in the end, our goal shouldn't be to just point the contradictions of how others put themselves on pedestals in the name of Christ, but to actually get down off of our own...

Thank you, Keith, for sharing your struggle with us. Very insightful commentary. Keep sharing and helping us grow with you!