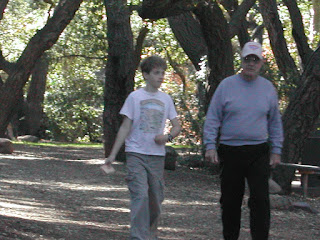 Last Saturday morning I drove my oldest son out to Oak Canyon Nature Center in Anaheim Hills. It was the day after his 13th birthday.

We walked together across the parking lot and I let him walk alone down the main trail into the woods. After a few feet his Aunt Felicia met him and walked alongside him, encouraging him and reminding him what a special young man he is. Then she stopped at the bridge and let him walk on further alone.

A few feet down the trail another friend, Scott Laumann, stepped out and walked with Dylan along the trail. They stopped and watched the colors in the morning sky for a while and Scott gave him advice on being responsible, seeking God and hearing His voice.

When they were done Dylan walked alone down the path a bit more until Jacob Wright met him along the trail. Jacob is just 15. Dylan looks up to him quite a bit. It was only a few years ago that Dylan had been part of Jacob's 13th birthday celebration. Now Jacob was sharing with Dylan what he had learned about becoming a young man after God's heart.

After their talk Dylan walked on and met Jacob's father, Jason, who talked to him about about how most of what we learn is from walking with God through difficult circumstances.

Dylan went on down the trail and was met by his Aunt Tina and his Grandmother, and finally, at the end of the trail, by his Grandfather Gerald. They turned and walked all the way back out of the woods together as Dylan listened intently.

When they reached the beginning of the trail Dylan's family was there waiting for him and together we drove home.

That afternoon we presented Dylan with a sword - a leather-bound, NIV Study Bible with his name engraved in gold leaf on the cover.

Our house church family, and a few friends were there to encourage him further, lay hands on him and bless him as he took his first tentative steps into manhood.

God bless you, my son.

That is just awesome man. I only wish that i could participate, so from South Carolina I send my blessings and my prayers for your son.

dont know if im just feeling blah, depressed or just gettin old. but i cried just a bit when i read this.