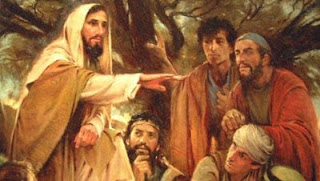 New Covenant Theology was the "new thing" a few decades ago and many were called heretics for defending and promoting it.

Previously, the two main theologies were Covenant Theology and Dispensationalism.

"New Covenant Theology (teaches) that the person and work of Jesus Christ is the central focus of the Bible. One distinctive result of this is that Old Testament Laws have been abrogated or cancelled with Jesus' crucifixion, and replaced with the Law of Christ found in the New Covenant."
This view also says that:

"The New Testament interpret(s) the Old Testament...when the NT interprets an OT promise differently than the plain reading, then New Covenant Theology concludes that that is how God interprets His promise."

"As an example, Amos 9:11-12 is quoted by James in Acts 15 and is interpreted by him to associate the rebuilding of "David's fallen tent" with the Gentiles' salvation. This would be a highly surprising interpretation to the Jewish believers, since there is no precedent for it to be interpreted as anything other than a promise to the nation of Israel. (Instead), New Covenant Theology says that God has given us His interpretation of that passage, through James."

As for me, New Covenant Theology has been my own personal perspective on scripture for a while now. Most of what I have written here on my blog, and in my various books, has been from this perspective.

But lately, my theology has started to progress a bit further than this.

I embraced New Covenant Theology because it affirmed that the Flat Bible perspective is flawed and reorients scripture with Christ as our ultimate authority. But unfortunately it stops short of allowing Jesus to fully reform our ideas about God.

So, while New Covenant Theology (NCT) affirms Christ as the center of scripture, it fails to completely embrace Jesus as our one and only image of who the Father is and what He is really like.

Where NCT falters is in fully admitting that the revelation of the Father found in Jesus is often at odds with what the Old Covenant prophets have to say about Him.

Furthermore, the NCT position also fails to admit that the prophets themselves are often at odds with one another about what God said and what God's character is like. [See, for example the differing statements made in the OT scriptures about whether God did, or did not, command the Israelites to offer animal sacrifices].

To help explain this, let me borrow an analogy. There are various answers to the question "Where do babies come from?" and someone might say "the stork brings them" and another might say "when mommy and daddy love each other very much the baby starts to grow in her tummy" and still another might say "the male contributes the sperm which he secretes during sexual intercourse to fertilize the egg which the woman provides and in 9 months the embryo matures into a fetus and a child is born."

Two of those answers might be considered "true", one of them is obviously a story designed to symbolize the reality without actually addressing any of the mechanics, and yet all of them are still an attempt to answer the question about where babies come from.

This is similar to what we have in the Hebrew Bible when it comes to question of what God is like. Some voices give us the "stork" version of the story, with great symbolism and hyperbole. Some voices give us an approximation of the answer. Other voices may give us more detailed and specific answers that more closely align with reality.

For us, Jesus is the reality. He is "the exact representation" of the Father. He is the one in whom "the fullness of the Deity lives in bodily form." He is "the Word made flesh who dwelt among us."

So, the best picture of the Father is found in Christ. If we have "seen Him," we have truly and accurately "seen the Father" in the most complete and full way possible.

Because "no one has ever seen God" except Jesus and the reason He came was to reveal the Father to us like no one else before ever could, or did.

As long as we insist upon holding tightly to the rigid inerrancy of the Old Testament scriptures, we will forever be kept from fully embracing the clearest and most accurate portrayal of who God really is.

Until we relax our grip on the idea that the Old Testament prophets were truly seeing God clearly and recognize that the Abba Father we see revealed in Christ overrides those limited and flawed perspectives of God, we will remain confused about who God really is.

As long as we allow the tarnished testimony of Moses to describe God as one who commands His people to slaughter infants and toddlers without showing compassion, we will forever stand in opposition to the testimony of Jesus who showed us an Abba Father God who loves children, cares for His enemies, shows compassion to the broken and commands us to do the same - specifically because this is who He is and what He is like. [See Matt. 5:44-45]

So, even as those who stood up and defended the New Covenant Theology view a few decades ago were considered heretics and false teachers by the Dispensationalists and Covenant Theology teachers of their day, we should not be surprised when the same charge is leveled at us who affirm a Jesus-centric perspective of God today.

Ultimately I believe it simply boils down to this: Who is our authority? Is it the Bible? Or is it Christ? Do we center our theology on a book, or on a person who is indeed God Himself incarnate?

The Book, as wonderful as it may be, is imperfect. It contains the testimony of men who sometimes saw clearly and sometimes did not. The Book contains the voices of men who don't always agree with one another about who God is and what God is like.

Our choice is simple: We either agree with Jesus about who God is, because He is God made flesh, or we side with those Old Testament prophets who were not perfect, not flawless and not Immanuel [God with us].