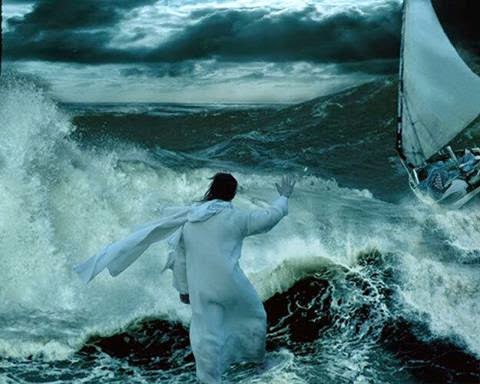 A few days ago I suggested to a friend of mine that should consider the words of Jesus regarding love for enemies before he continued to express his hatred for Muslim people.

Not only did my friend not take that advice very well, he quickly accused me of being a "self-righteous Pharisee" and said that Jesus "opposed" being a Pharisee.  Before I could respond he un-friended me and ended the conversation.

I could write a blog about how wrong my friend was in this case. I could go on and on about the irony of his using Jesus' distaste for Pharisees to justify an opposition to the practice of urging a fellow Christian to obey the words of Jesus, when what Jesus commanded was that we teach one another to obey all that he commanded. But I won't.

Instead, I'd like to talk about how I have failed to obey Jesus, even as I call him my "Lord."

It's too easy to react to the failures of others, isn't it? Peter was quick to point to the Apostle John and ask Jesus, "What about him?" when Jesus had just told Peter to follow him and feed his sheep.

And Jesus response to Peter is the same to you and to me: "What is it to you? Follow me!"

So, I have to examine my own heart first and when I do I realize that lately there have been several times when I have called Jesus "Lord, Lord" even though I was not doing what He said to do.

I have failed to love my neighbor as I love myself.
I've failed to risk my pride in order to serve someone else.
I've held back my money from those who asked for help because of my own selfishness.
I've joined in the gossip talk at work rather than walk away, or offer a positive perspective about the person being roasted.

Jesus sincerely wants us to follow Him. He absolutely expects us to put his words into practice. That's why, right after he spoke those words about calling him "Lord, Lord" he went on to tell this parable:

"For I will show you what the one who comes to Me and listens to My words, and puts them into practice is like: He is like a man building a house, who dug and went down deep and laid a foundation upon the rock; and when a flood arose, the torrent broke against that house and could not shake or move it, because it had been securely built or founded on a rock.

"But he who merely hears and does not practice doing My words is like a man who built a house on the ground without a foundation, against which the torrent burst, and immediately it collapsed and fell, and the breaking and ruin of that house was great." (Luke 6:47-49)

I love when Jesus washes the disciples' feet on the night he is betrayed, and afterwards he sits back down and says:
"Now that you know these things, you will be blessed if you do them." (John 13:17)

When another person fails so spectacularly at following Jesus, and runs hard in the opposite direction to avoid even discussing the possibility of putting Jesus' words into practice, it should not make us feel superior.

It should knock us to our knees. Not only to pray for our brothers and sisters who are building their lives on the sand, but to take a good, hard look into the mirror and honestly evaluate our own unwillingness to put the words of our Lord into practice.

We will only give an account of ourselves before the Lord for everything we have done or said in this life. What has been said in the darkness will come into the light. Every idle word will be proclaimed from the rooftops.

That is why I'm confessing my own failures and exposing my own areas of weakness, here and now.

I'm asking Jesus to come and live and breathe in me anew, and to empower me with His Spirit to love as He loves, give as He gives, serve as He serves, and live as He lives.

Like Paul, I forget the past and press on to the high calling of Christ. My hope is not in my own strength, but in His.

Without Him, I can do nothing. But if He abides in me, and if I abide in Him, together we will bear much fruit.

What the world needs now are more Christians who are serious about taking the words of Jesus and putting them into practice.

I have read your article and copied some of it down to post on my facebook page-just letting you know so you know your post will be used to promote the glory of God--thanks--great post!

To know the Truth is to love Him, and loving Him is obeying Him. He told us so, plainly.