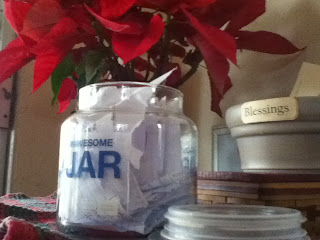 Last year our family started a new tradition. We decided to write down all the miracles and answered prayers the Lord provided for us during the year and place them in a jar. Then, on New Years Eve, we would open the jar and take turns reading to one another all the times that God had done something amazing in our lives.

We took the idea from the passage of scripture in Exodus where God commanded the Israelites to remove one stone for each of the 12 tribes from the dry ground in the Jordan where the Lord had dried up the river and allowed them to cross over. God then told them to build a mound of these "stones of remembrance" so that generations later they could point to them and remember the time when the Lord had taken them into the Promised Land.

So, our "Jar of Remembrance" works the same way. On New Year's Eve we sat down and read again about how the Lord had saved our entire family from being killed the night that our pilot light went out on the water heater and we only discovered it because David (our youngest son) had decided to take a shower before going to bed and noticed there was no hot water. A closer inspection revealed that the pilot light was out and the cabinet was already filling up with explosive natural gas. After I shut off the water heater I called the gas company. When their technician arrived at midnight he found two gas leaks in our heater, and another one in our dryer line. We would've all died in the night if not for this discovery.

We also remembered how God had answered our prayers Dylan (our oldest son) to sell all of his raffle tickets for school in a single day and how God did that - not once but twice.

We remembered how He cared for us and comforted us when we had our miscarriage, and we remembered how He had spared Wendy from getting a ticket the time she stopped in the wrong lane at LAX airport and the police officer discovered she didn't have her driver's license with her.

We remembered how God answered specific prayers and encouraged us in amazing ways during the year. Then we bowed our heads and thanked God for His faithfulness and constant care.

It was so great we decided to start over again in 2014. We've taken all the slips of paper with the testimonies of God's provision in 2013 and placed them in an envelope (in case we ever want to remind ourselves again of what He did for us), and our new jar sits empty on the table in our den, just waiting for the next time God answers a prayer, or works a miracle, or speaks to us in another amazing way.

Maybe you need to be reminded sometimes of God's enduring love? May I suggest finding an old candy jar and starting a Jar of Remembrance of your own? It's a great way to build your faith and to count all of your many, many blessings.

Just be sure to choose a very large jar. They fill up pretty quick.

Email ThisBlogThis!Share to TwitterShare to FacebookShare to Pinterest
Labels: answered prayers, count your blessings, god is faithful, jar of remembrance, stones of remembrance