A Christian Response To Terrorism 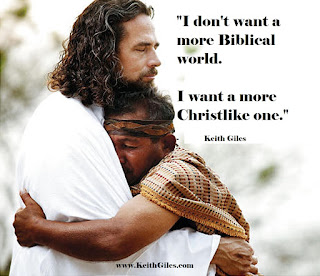 With every new terrorist attack, Christians in America struggle to respond as Jesus would. Like everyone else, we condemn the terrorists. Like everyone else, we pray for the victims. Like everyone else, we cry out for retribution and we paint every Muslim on earth as an evil person who should be hated and opposed.
But we’re not called to be like everyone else. We’re called to be like Jesus.
So, instead of responding like everyone else does, maybe we should take a step back and try to look at the problem the way Jesus does.
He doesn’t see us as Americans, or Europeans, or Asians. He sees us all as His beloved children who are made in His image.
He doesn’t see us as Baptists, or Buddhists, or Muslims or Atheists. He sees us as a people He would rather die for than to live without.
Ultimately, God doesn’t look at the outward appearance, or the superficial labels we all wear. God looks at the heart.
This means He takes each person one at a time and evaluates them based on who they are on the inside, not what they are on the outside.
Muslims, specifically, are not the problem. They are human beings; members of the human race; and they have the same dreams and hopes and fears and aspirations as we all do.
They love their children. They are concerned for their families. They care about those who suffer. They worry about the direction their nation is going. They want to be happy and they want to make the world a better place. Just like you and I do.
Christians have more in common with Muslims than with almost any other world religion. Muslims and Christians both believe in Jesus. They both believe different things about who He was and what He did, but what we have in common with Muslims is greater than most realize.
For example:
Mohammed is mentioned 4 times in the Qu’ran. Jesus is mentioned 25 times.
The Qu’ran teaches that Mary, the mother of Jesus, was a virgin who gave birth to Jesus. [ch.3:34]
In chapter 3, verses 45 to 55, the Qu’ran makes these 9 points about Jesus [whom they call "Isa"]:
·         Jesus is the “Word of God”
·         Jesus is the “Spirit of God”
·         Jesus is “the Christ” [Messiah]
·         Jesus creates life
·         Jesus cured a man born blind, and a man with leprosy.
·         Jesus gives life to dead people.
·         Jesus went to heaven.
·         Jesus is still alive today.
·         Jesus will come again.
In contrast, the Qu’ran says none of these things about Mohammed. According to their own book, Mohammed did no miracles, is not alive today and is not coming back.
The Qu’ran teaches that God created the Universe through the Word of God.
The Qu’ran also says in ch. 10 verse 94: “If you have any doubt in this Qu’ran which I give to you, go and read the Bible, or ask the people who read the Bible. The Truth has already come to you from your Lord, so do not be a doubter.”
Finally, Mohammed himself personally wrote a letter to his followers and commanded them to provide protection and favor to those who follow Christ. It was written in 626 AD and was called the “Oath of Ashtiname” and you can read about that here.
In this Oath of Ashtiname that Mohammed wrote, he says:
“Their churches must be honored and they must not be withheld from building churches or repairing convents…They must not be forced to carry arms or stones; but the Islams must protect them and defend them against others. It is positively incumbent upon every one of the Islam nation not to contradict or disobey this oath until the Day of Resurrection and the end of the world.”

So, here we have a beautiful place to start building bridges with people of the Muslim faith. We can begin the ministry of reconciliation that Jesus has given to us by reaching out to Muslims, inviting them into our homes, sharing the blessings we have been given, and meeting together with them to talk more about Jesus.

Our house church family has hosted several Muslim people in our worship gatherings over the last ten years. We’ve prayed with them, eaten with them, laughed with them, and encouraged them by acknowledging that they are – like us – people who love God and honor Jesus.

We don't believe exactly the same things, but we have a wonderful common ground to start learning to love one another from.

We cannot afford to respond to violence and terrorism the way everyone else does. We are ambassadors of a different Kingdom. We are partakers of the Divine nature. We have been given a new heart. We have been – and are now being – transformed by the agape love of Jesus into a people who look and act and love like Jesus.

Let’s repent of returning to our old nature when faced with evil in all its forms. Darkness cannot drive out darkness. Only light can do that.

Related links:
Join The Christian Anti-Terrorism Task Force
How To Fight Like A Christian
Incarnation of Love: Mary Emily Duba
The Family That Love Built
A Force More Powerful
Love,Hate and the Kingdom of God
Subversive

For Further Reading:
"Muslims, Christians and Jesus" by Carl Medearis
"The Jihad of Jesus" by Dave Andrews

I really don't think we're going to make any progress against religious extremism--Christian, Muslim or whatever--by pretending it isn't a problem that needs to be effectively addressed. May I suggest a concrete way to approach the issue? I think it would be great if leaders in every church, synagogue and mosque, etc. in this country and the world would preach about preventing violence. This should be even to the point of contacting the civil authorities if all else fails if some member appears to be trending in that direction.

We really all are and should be our brothers' keepers. The first line of defense in any group is the members of that group itself.

It doesn't really matter whether the problem is greater in some groups than in others, because even just one death or injury due to religiously motivated violence is way too many. And if all the different groups participated, it would not make it look like any one was being singled out.

I suggested this a couple of year ago to our pastor and also submitted a more developed article on the topic to the Sojourners web site, which declined to publish it. Although I didn't see any results from my previous efforts, I still think it's a good idea and even more so in the light of recent events.