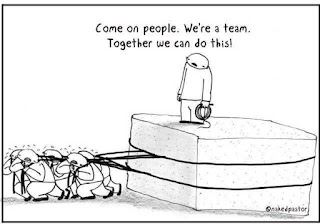 Part 4: THE DANGER OF CREATING HEROES AND EXPERTS

I've written about this before on my blog and shared my concerns about elevating leaders within the House Church/Organic Church movement to become our own versions of "Pastors" and "Bishops". If we do that we've now become as guilty as the rest of the traditional church we left behind in order to pursue Christ as our only Head.


This is a two way street, by the way. It can be the Leader who seeks the fame and the name, or it can be the people who seek after a guru who will tell them what to believe and how to behave. Or, it can be a little of both.

As someone whose personal sin is Pride, I have to admit that I'm very aware of this tendency in myself and I work very hard to sit in the background of our own church family and not take the Lord's place in the Body. I used to limit myself to only two "soap box moments" every meeting. Then my goal was to try not to share a comment on what every person shared during the meeting (which created a sort of conversational ping-pong where someone would share and then I would comment and then another person would share and then I would comment again, etc.). Now my goal is to keep silent unless the Lord really prompts me to share something. Otherwise, I sit quietly and I listen.

I know that sometimes people who read my blog or my books will visit our house church and they'll expect that I'll have some cool teaching to share every time. But that's not what happens. If anything, I'll rarely talk at all unless the Lord has given me something to teach or to share.

I'll never forget when one brother visited our group for the first time after reading my blog. He came on a Thursday evening and after I played the guitar during the shared worship time, I got up and left the room. He told me later that he thought it was very weird that I would do that, but the group didn't miss a beat and people were sharing and teaching and praying for one another spontaneously without me in the room. Eventually he did notice that I had returned to the room when I spoke up and shared something, but until that moment he was oblivious to my presence, which is sort of the point, really.

My goal is really to encourage everyone else to share. I really want to hear what my two teenage boys have to say. I want to hear from those quiet wives who never speak out. I want hear what that five year old boy has to say about Jesus. Those are always the most profound things, really. I've learned so much from the most unlikely sources. It's amazing, really.


This kind of thing is a movement of God. No man can take credit for this. When I hear from people all over the nation, and even the world, that God is leading them in this same New Testament model of "being Church" it excites me. Because we're not moving in this direction because we read a blog or a book or attended a conference. Every one I've spoken to shares their story about how God did this to them. God called them to step outside the traditional model of Church and they obeyed Him and followed His leading, even at a great cost - usually friendships, or salaries, or the respect of others, etc. But when I hear those testimonies I rejoice because I know that God is purifying His Bride and He's doing something marvelous that no man can dare take credit for.

My heart says Amen to all that I have read so far. Thank you for making this lonely path a little less lonely.