Are You American or Christian? 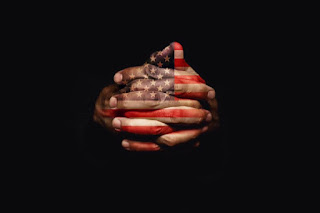 The Church today is more American than Christian. We are largely unable to divorce our faith from our nationalism. This, to me, is very troubling because it means that we are unable to understand Jesus and His teachings apart from our own cultural context.

Those who follow Jesus know that the solution to society's problems will  never be found in politics. If we hope to change the hearts of men and women by laws and policies then we are both mistaken and misguided.


Jesus commands us to pledge allegiance to the Kingdom of God, not to a flag or a nation. I'm not saying it's a sin to love your country, or to vote, but I am saying that once we blur the lines between what Jesus is all about and our national pride we might have a problem. A big problem.


We are commanded by our Lord to seek first the Kingdom of God and to trust in Him alone – not the laws of our land, or our political parties.

It disturbs me that so many Christians I know are more acquainted with politics than they are with the Word of God or following Jesus in their daily life.


To try and help American Christians understand how this Americanized Christianity can blind us I have often tried to ask followers of Jesus to realize a few basic truths. The first being that the vast majority of our brothers and sisters on the Earth are not living in America.

This means that many of them are following Jesus in nations like Korea, Russia, China, and other countries with radically different political ideologies. So, if someone comes to Christ in China, for example, does that mean that they also – upon receiving Jesus – suddenly become a Capitalist? Of course not. The decision to surrender your life to Jesus and follow His teachings and example does not make you an American. We have to try to conceptualize - and practice - our faith apart from our patriotism.


So, we must realize that someone can be a Christian without pledging allegiance to the flag, or that nation for which it stands.


Even more importantly, we must strive to see Jesus apart from our cultural, political and nationalistic filters. This means our posture towards the poor and the outcast should be informed by our Lord Jesus, not by our political worldview.


Our hope is in the power of the Gospel to change hearts. It is not in the power of politics to legislate morality. If we’re not careful, we will end up succeeding in our quest for power and we will have only created another oppressive Theocracy like the one our founding fathers came here to avoid.


At best, if we succeed in creating the perfect Government we will still have failed to obey Jesus and make disciples of all nations.


The Governments of this planet are of this world, they are not of God. Our allegiance is to Jesus alone. His Kingdom is our only true homeland.


Are you an American, or are you a Christian?


If you think you can be both, I urge you to carefully reconcile the widely divergent philosophies of Christ and those found in our Constitution.

Americans have the right to be treated equally and to pursue happiness. Christians have only the right to share in the sufferings of Christ, give up their individual identity, and love and serve others as Jesus did.


Americans have the opportunity to vote and chose their leaders. Christians have only One leader, and owe their allegiance to only one, true Holy Nation- the Kingdom of God.


Ask yourself: “Which of Jesus’ teachings were the basis for the American Government?” Was it turning the other cheek? Or loving your neighbor? Or doing good to those who hate you? Or blessing those who curse you? Maybe it was the Sermon on the Mount or the Great Commission? No, it was none of those things. Therefore, America is not a Christian Nation and it was not founded upon the teachings of Jesus.


There is only one Holy Nation on this Earth and it is us.


Who is he talking to? To the Church. We are the Israelites who are now called “a holy priesthood” and“a holy nation”. Not just Jews, but anyone who is in Christ! As it says in Revelation 5:9-10:


“And they sang a new song, saying: “You are worthy to take the scroll and to open its seals, because you were slain, and with your blood you purchased for God persons from every tribe and language and people and nation. You have made them to be a kingdom and priests to serve our God, and they will reign on the earth.”

Would you give up being an American to follow Jesus?

Great post! I resonate so much at so many levels that I am tempted to write a book in response!

I will not do that. But I will say thank you for this post. Very encouraging to read this.

You question reminds me of Lee Camp's book, Mere Discipleship where he discusses American Christianity and compares it to that of Rwanda just before the genocide. Very insightful.

Another book I found deeply shaping of my views was Colossians Remixed by Walsh and Keesmaat.

I do not pledge allegiance to the flag since I went to college where one of my prof's challenged the idea. I have stopped voting in recent years too, though I do not preach against it. And I do believe in being involved in politics, but promoting love and prayer there rather than fear and hate.

Enjoyed your post, first one of yours I have read. Is there a nice way to say the tiny print was a bit of a distraction from what you are saying? What you are saying is great, be bold and let us see it. :)

Politics is the solution to some of society's problems. I don't think that you would disagree with that statement.

I have friends who keep telling everyone that this country was founded on Christian ideas - then spend a lot of time arguing with those who do not agree. I don't see how that is helping anyone come to know Christ, or learn to serve Him better.

Regardless of what the founders believed, the country we now live in has a lot of very unChristlike behaviour. We are in no way a Christian nation, and some of what we do in the name of our country is contrary to what the Bible says we should do.

Your blog is great!!! I found it today, and I think you sincerely hit the nail on the head on every topic I've read so far.

One thing, though.. Paul says this in Romans:

"13 Let everyone be subject to the governing authorities, for there is no authority except that which God has established. The authorities that exist have been established by God. 2 Consequently, whoever rebels against the authority is rebelling against what God has instituted, and those who do so will bring judgment on themselves. 3 For rulers hold no terror for those who do right, but for those who do wrong. Do you want to be free from fear of the one in authority? Then do what is right and you will be commended. 4 For the one in authority is God’s servant for your good. But if you do wrong, be afraid, for rulers do not bear the sword for no reason. They are God’s servants, agents of wrath to bring punishment on the wrongdoer. 5 Therefore, it is necessary to submit to the authorities, not only because of possible punishment but also as a matter of conscience."

The only thing I think a person could take issue with (biblically) is the notion that Governments are of the world and not God.

I do agree with you, and it's undeniable that some of the world's governments have been completely morally corrupt (nazi germany for example)

So I'm conflicted on this front. Some parts, it mentions that the enemy or at least corrupted humans are in control of the world's powers, and this verse says God is.

Keep up the great writitng, i'll be tuned in.

The text says that God uses the governments of this world to provide justice for the people. I think, in context, that He's showing us that this is the job of the secular government to "wield the sword" and that the Church should not.

Also: Keep in mind that Paul wrote this at a time when the Romans were anything but just and fair towards Christians.

Thanks, Keith! You are stirring it up well! I like how you set up the alternatives, because these are the main alternatives today in this western, Christian culture.

It seems the better Jesus alternatives might be to choose between the early kingdom of man and the Kingdom of God/heaven. This allows for all non-western, Christian cultured people to make the same universal choice.

Good article. We really have it messed up here in the US. Granted, I love living here and I wouldn't want to live anywhere else in this world, but we have mixed being American with being Christian, and it's two separate things. American Christianity is way off base. I posted an article along the same lines here: http://donewithreligion.com/2015/07/01/independence-day/ Thanks.