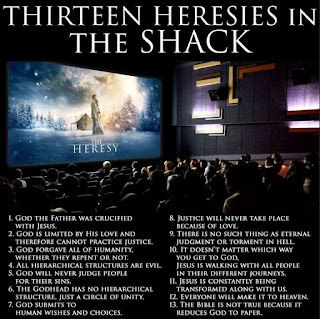 Full Disclosure: I have never read the book, “The Shack” nor have I seen [or plan to see] the new film coming out that is based on this book.

You’ve no doubt seen memes like this one [see above] posted online by your friends on Facebook, usually warning you that this book, and the film, contains heretical doctrines and ideas about God.

Again, having never actually read the book myself, I can only respond to this list, but I feel the need to respond nonetheless.

Honestly, I agree with about half of these statements. So, from where I stand, a book or a film that shared these ideas would not only not offend me, it would probably make me stand up and cheer.

Here are the doctrines I don’t agree with:

2. “God is limited by His love and cannot practice Justice” – God is not limited by anything other than Himself. He can do whatever He wants, as long as it doesn’t contradict His nature. So, for example, God cannot hate His children. Why? Because God’s nature is Love. God is love. So He cannot hate His children. But that doesn’t mean He cannot practice Justice. Justice just means “making things right”, and trust me: God is absolutely devoted 100% to making things right.

7. “God submits to human wishes and choices” – God is the absolute ruler and King of the Universe. He does not “submit” to anyone, anywhere, for any reason.

8. “Justice will never take place because of love.” – If Justice is “making things right” then Love is how and why Justice will absolutely take place.

11. “Jesus is constantly being transformed along with us.” – Not sure how to respond to this one. Really wonky. Maybe an example from the book that illustrates this might help? At any rate, I disagree with this idea.

13. “The Bible is not true because it reduces God to paper.” – I disagree with this because the Bible being “true” is not dependent upon whether or not it is written in paper. But, I will say that God did not become a book. The Word was made flesh and came to dwell among us – and then within us by His Holy Spirit. So, I might modify this one to say: “The Bible is not God. God is not the Bible. God is bigger than your Bible. He can be heard and experienced outside of reading the Bible.”

NOW, here’s what I agree with on this list, and why:

1.”God the Father was crucified with Jesus.” – This comes down to how you understand the crucifixion. If you’re a believer in the Substitutionary Atonement Theory, then you’re going to disagree with that statement. But, if you’re someone who accepts the “Christus Victor” view of the crucifixion, then you might not have such a problem. For example: Where was God when Jesus was on the cross? Was He in Heaven awaiting the payment in blood so He could excuse His wrath against mankind? Or, was “God in Christ reconciling the World to Himself?” [2 Cor. 5:19]

If you’re curious about this view I’d recommend watching this video clip from Brian Zahnd which offers an excellent explanation:

3. “God forgave all of humanity, whether they repent or not.” – Now, where would anyone get such a crazy idea as that? Oh, wait a minute:

“…that God was reconciling the world to himself in Christ, not counting people’s sins against them. And he has committed to us the message of reconciliation.” [2 Cor. 5:19]

5. “God will never judge people for their sins.” – So, I do believe that God [specifically Jesus] will judge mankind for their sins. This is what Jesus refers to in Matthew 25 when He sits on the seat of Judgment and separates the sheep from the goats. But I would modify the statement to suggest that God’s judgment might take the form of allowing people to suffer the fruit of their own decisions. This gets into a discussion about different views of Hell and suffering, so we’ll cover that in #9 below.

6. “The Godhead has no hierarchical structure, just a circle of unity.” – I kinda agree with this. There are plenty of verses that suggest that the Father exalts the Son to the highest place, and the Son says that the Father is greater than Him, and the Holy Spirit glorifies the Son which in turn gives glory to the Father and around and around it goes.

So, I don’t think it’s really heretical to suggest that the Godhead has no hierarchical structure but has a more circular/mutual submission to one another model where each one exalts the other in loving humility.

9. “There is no such thing as eternal judgement or torment in hell.” – These are 2 separate ideas. I personally reject the doctrine of eternal suffering – as did the majority of early Christians in the first few hundred years of Christianity.

[see more here] “What About Hell?”

However, even those who reject eternal suffering usually embrace either “Anihilationism” or “Universalism” which, classically, both embrace the idea that there is a period of torment or punishment for those who reject Christ. The difference of opinion is only about how long that might last and what the purpose of that punishment might be.

10. “It doesn’t matter which way you get to God, Jesus is walking with all people in their different journeys.” –Yes! My friend John Fischer has a great song that points this out saying: “Jesus is the only way to Heaven, but there’s more than one way to Jesus.”

I think it boils down to this: God is the judge, not us. He is the one who will decide who does or does not end up in His Kingdom. All we can be certain of is that: A) God is fair and just and B) God will always do the most loving thing possible.

So, however God judges those outside of the Christian faith, we can trust that His decision will be loving, fair and just. Outside of that, it’s not our job to worry about that.

Here's a little 5 Minute Video I made about this subject:

12.”Everyone will make it to heaven.” – This is Universalism and it was the majority Christian doctrine for the first few hundred years of Christianity. True. Check it out here: “What Should We Believe About Hell?”

Now, I’m not saying I personally embrace this doctrine, but I can tell you that it’s just as “Biblical” – if not more so – than the more popular doctrine of “eternal suffering”. [Again, please see those links above for more info].

I read the book multiple times and have spoken with the author and the publisher. I love the book and question where you got the list of "heresies", because I'm not sure I saw some of them in the book, and like you, I agree with some of the others, but even they are worded differently in the book than they are on that image. Here is a blog post from the publisher about the questions of heresy in the Shack. https://www.lifestream.org/is-the-shack-heresy/

The sad thing about the meme is that Paul Young himself would be offended by some of the statements. The list comes from an old sermon a guy called Michael Youssef did that went viral a few years back. I wrote a little piece this week as well on the book, confirming which ideas are actually in the book and which it is falsely accused of. You might enjoy it http://wrostoll.blogspot.co.za/2017/02/bracing-for-shack-attack.html.

I love you but I don't waste my time offering opinions on a book to someone who hasn't read it. If you care enough to write on it then care enough to read it.

Please note: As I say right off the bat, this is NOT a review of the book, or the film. I saw this list of 13 Heresies and I am reacting to this list ONLY.

I don't think everything in the book is "accurate." By the same token, it addresses issues for which getting it right is above our pay grade, frankly. Ultimately, my brief summary is that it is a profound theological treatise wrapped up in a story. In that sense, it's thoroughly postmodern, with both the good and the bad that that implies.

Reading some of your other writings, I think you might enjoy the movie and book. The meme severely distorts what The Shack portrays and makes some claims that I didn't really see myself in either the book or the movie. It would appear that those most offended, and thereby looking for reasons to discredit it, are the same people that have based their life, politics, and religion around a very distorted view of God. To even consider changing one's mind about how God is perceived seems to undermine the mechanisms that many people's entire lives have been based around. It's more comfortable to just continue forward with the status quo and discredit anything that challenges a belief system than to really ask ourselves the hard questions works like The Shack may present.