GOD IS NOT A REPUBLICAN OR A DEMOCRAT [OR AMERICAN] 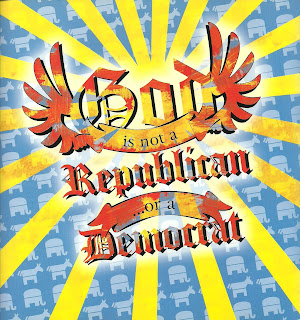 One of the hardest things for Christians in America to understand is that God does not love them more than He loves people in other nations.

God's love for Iranians and for Koreans and everyone else on the planet is equally the same. [Which is to say "Ginormously gargantuan beyond imagination"].

There's an excellent example in the Bible of when others made a similar mistake in assuming that God was on the side of their nation.

Joshua, as he was preparing to go to battle against the pagans of Jericho, encountered a soldier he did not recognize. Little did he realize at the moment that he was standing in front of the Captain of the Angelic Host. [See Joshua 5:13-15]

Quickly he confronted the soldier and asked, "Are you with us, [the people of God] or with them [those ungodly pagans over there]?"

Now, to most of us, the answer should be simple: God is, of course, on the side of those who worship Him. Right?

The answer the Captain of the Lord's Army gives should give us pause. He says, "Neither."

Wait a minute. Why isn't God on the side of those who worship Him?

The real question we should ask is not, "Is God on our side?" but "Are we on God's side?"

If we identify ourselves as "Americans" and then assume that God is on our side, we forget that God also loves China, and South Africa, and Norway, etc. That means that God doesn't take sides.

So, are we on God's side, or are we on the side of our nation?

The truth is, we cannot chose both sides at once. Why? Because America fights for American values and American interests and American prosperity.

Our allegiance is to Christ and His eternal kingdom.

So, let me ask you: "Are you with Christ, or with your nation?"

My book "Jesus Untangled: Crucifying Our Politics To Pledge Allegiance To The Lamb" is available now on Amazon.

Email ThisBlogThis!Share to TwitterShare to FacebookShare to Pinterest
Labels: #jesusuntangled, Crucifying Our Politics to pledge allegiance to the lamb, god is not a republican or a democrat

Thank for article. I'm sure there are more than a few that God is speaking thus and they are not sure what to do with such thinking. True Thinking nevertheless prevail! Is this on your face book? Looking for the date if so. Thanks.

"One of the hardest things for Christians in America to understand is that God does not love them more than He loves people in other nations." However, it is clear God has blessed American believers with much more financial resources than other nations. A harder thing still is for Christians in America to recognize that God has blessed them with more financial resources not to be consumed by Americans (mostly by ourselves) but to pass on this blessing with giving to meet the spiritual and material needs of other nations.

I fail to recognize how my involvement with politics as part of my responsibility to "peruse justice" is any kind of contradiction of my allegiance to Christ and being a "reconciler" pointing people to follow Christ. "...whatever you do, it heartily as unto the Lord, not serving men..." can include involvement in the political world. Romans 13 says God is involved with politics, that creates no false worship or false allegiance when I am involved with it also.

In the time of the writing of the Bible, there was no such thing as a government of the people, by the people, and for the people. There is one now, and we are the government. What am I missing?


'Fail to recognize'. Admission is the first step on the road to recovery.

Mark, I gave a basis from scripture that shows my involment in politics is nothing to recover from. It seems to be in harmony which God's own work and his invitation to do everything as "unto the Lord". Involvement in politics is not included in the lists of works of the flesh or the list of things that disqualify one from entrance into the kingdom. Perhaps I am missing something and you can fill me in on it so I can recover.

For most Christians the idea of not voting sounds sacrilegious. But following Jesus means turning away from the “patterns of this world” in favor of a better way – the Kingdom of God.

Here are some reasons why you shouldn’t vote if you follow Christ:

1. Because in over 6,000 years of human history, politics hasn’t solved any of our basic problems

2. Because politics divides the Body of Christ and creates false “us vs them” mentality

3. Because we will one day give an account to God for how we spent our time/money and investing in such an ineffective system is unjustified.

4. Because politics is about writing, passing and enforcing laws. Even God’s law wasn’t capable of creating the change we need. Why do we think we can do better?

5. Because when you have the power to change every human heart from within and make people brand new inside you don’t waste time on politics

6. Because we realize that to have a Christian nation you need to start with a nation of Christians. By making disciples we’re collaborating with Jesus to remake the world from within.

7. Because the Gospel is not spread through political actions or laws.

8. Because we admit that seeking political solutions to mankind’s problems is the same as giving up on the power of the Gospel to change people from within.

9. Because passing laws that force people to act Christian isn’t the same as making people like Christ.

10. Because our core problems, as a human race, are spiritual in nature. That means the only solution is spiritual.

11. Because politics is ultimately about compromise, power and corruption and no follower of Jesus needs to get entangled in those things.

12. Because human governments are essentially focused on gaining power and national wealth through violence and war.

13. Because politics is part of the world system we are called out of and saved from. It is one of the entanglements the scriptures call us to avoid.

14. Because the currency of politics are fame, money, power, manipulation and lies.

15. Because politics involves raising and spending billions of dollars which could better be used to build the Kingdom, feed the poor, care for the sick and comfort the outcast.

16. Because the NT portrays the enemies of Jesus as “the nations” and “the Kings of the earth”, we must stand with Jesus and work to advance His Kingdom, not promote earthly governments or leaders.

17. Because choosing between the lesser of two evils is still a choice for evil.

One of the most dangerous entanglements faced by Christians is in politics. Why? Simply because those who become entangled in politics do so out of a sincere desire to make a positive difference in the world. But rather than employ the methods that Jesus gave to us, they are attempting to change the world using the world’s systems.

Jesus did not come to give us more of the same, but with a cross on top. No, He came to show us a new and different way than anything we had ever even imagined before. This is why He started His Sermon on the Mount by urging all of us to “think differently” about everything. He had different ideas like overcoming evil with good, loving our enemies, and laying down our lives for one another.

Of course, every Christian hopes to make an impact on the world. But Jesus has the very best possible plan for changing the world from the inside out – without bloodshed or oppression or violence.

No, there’s nothing wrong with wanting to make the world a better place. The problem is in seeking to do so without Jesus. Or, worse, to mix Christianity with Politics.

You know what you get when you mix religion and politics? You get politics.

Jesus shows us a better way.