3-D Communion: From Ritual to Relationship 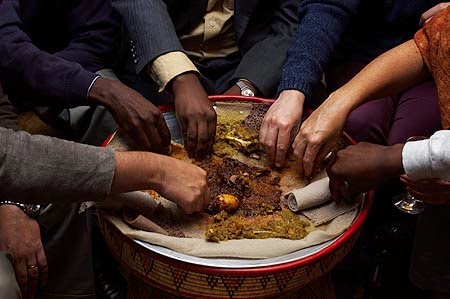 A few months ago, our organic church group celebrated its first Lord's Supper.  Think less a wafer and a shot of grape juice, and more a "love feast."

Everyone pitched in and served everyone else.  The meal was homemade- nothing processed.  Everybody helped make the bread- even the children.  We did everything but stomp the grapes.

We fellowshipped while we prepared the feast.  We shared thoughts, songs and passages of Scripture during the meal as the Lord led, and we carried that communal time into the post-meal cleanup.  In short, this experience revolutionized the word "fellowship" for me.

This experience also brought an entirely new meaning- a deeper meaning- to Paul's rebuke of the Corinthian believers in 1 Corinthians 11:17-34.

Some Christians in the contemporary church today fail to grasp the deeper meaning of 1 Corinthians 11.  We don't necessarily misinterpret, but we probably under-interpret the immensity of the problem.  It wasn't until I began to experience organic church life that I was able to grasp the depth of the offense Paul was seeking to correct in the Corinthian church.

Many of us cannot fathom what a 1st century Lord's Supper may have looked like.  I couldn't.  Until recently, I never knew the Lord's Supper as a full meal. All I knew was a Styrofoam wafer with a factory-stamped cross on it, and a shot glass of grape juice, served on a golden tray that passed by me as I sat quietly in my pew. Somber music played in the background while I waited for everyone else to get their Communion elements before we "feasted" on the Lord "in our hearts."

This scene is a far cry from the Communion of Paul’s day.  The 1st century Christians knew Communion as the Lord's Supper, a love feast- an entire meal shared between disciples who gathered to fellowship with one another and remember the Lord who sacrificed Himself for them on the cross.  And now that I've experienced natural, God-led fellowship in the context of a full-fledged communion meal, Paul's rebuke of the Corinthian believers becomes more pointed and heartbreaking than ever.

In 1 Corinthians 11:17-34 Paul told the believers in Corinth that he could not praise them for the way they acted when they gathered together to break bread.  Why not?

The Corinthians who gathered to celebrate the love feast honored neither God nor neighbor by their actions.  When they gathered, some believers gorged themselves while others went hungry.  As Paul wrote,
"...When you come together, it is not the Lord's Supper that you eat, for when you are eating, some of you go ahead with your own private suppers.  As a result, one person remains hungry and another gets drunk" (11:20b-21).

His most incriminating rebuke comes in v. 22: "Don't you have homes to eat and drink in?  Or do you despise the church of God by humiliating those who have nothing?"

He even goes on to say that those who are guilty of acting in this way are "guilty of sinning against the body and blood of the Lord" (11:27).

Ouch!  That's a weighty accusation to throw out against a church.  But honestly, I couldn't completely understand why.  I never got it because I always assumed it was about the communion elements themselves.  While, yes, that's obviously important, that also misses a huge detail.  It was never only about the food.  It was also about the people; the people who missed out on the fellowship; the people who didn't connect with other believers; the people who were shortchanged of the opportunity to both serve others and be served by them.

I'm also floored by the way the offending believers acted toward the poorer disciples at these love feasts.  I simply cannot imagine someone showing up to our supper and me telling them, "I'm sorry, brother, but we went ahead without you.  We feasted- and it was good!  We fellowshipped and really connected in such a powerful way that only God could have done that!  Sorry you didn't get here sooner.  We don't really have much left, but maybe I could whip you up a bologna sandwich...."  The poorer believers were left with not only mere physical crumbs of food, but also spiritual crumbs of fellowship.

Do you see how spiritually criminal this was?  They gathered together to celebrate the Lord's Supper, but they obviously forgot to bring God with them!  Expecting God to be okay with the way these believers were acting was no different than the wayward Israelites offering sacrifices while trampling mercy and love underfoot.

The believers at Corinth failed to realize the truth that James so beautifully captured when he wrote: "Faith by itself, if it is not accompanied by action, is dead" (Jam. 2:17).

If our faith is not a tangible faith, then what good is it?

From Ritual to Relationships: A Paradigm Shift

What tripped me up when I used to approach this passage was that I looked at the situation in terms of the sacrament, but failed to truly grasp what was going on.  I failed to understand that Paul warned the believers to check their hearts before taking part in the Lord's Supper, (not because we have to be paranoid about any lurking unresolved sins and confess them lest we invite the punishment of the Almighty), but rather because communion had become something less than it was intended for the Corinthian believers.  It had devolved into something somewhere between a rote ritual devoid of its true meaning and an outright excuse for the wealthier believers to get together and feast without restraint.

So, where's the application here?  Actually, I have two application points.  First, we have to be so very careful when we approach the text of the Bible. It’s easy to read what we think it says rather than what it actually says. This is a Hermeneutics 101 lesson- check your biases at the door.  It's easy to slip up, anyone can do it.

The second point plays off of the first: faulty interpretation can lead to misguided application. I misinterpreted this passage and only saw the ritual, but Paul was speaking just as much about the people who were being overlooked as He was about the supper itself.  I saw communion elements, he saw the poor being neglected.  I saw ritual, he saw relationships.

Our new life in Christ was never supposed to be primarily about lifeless religion- the world has enough of that. It's supposed to be about a living, breathing, vibrant relationship with the Lord that is expressed in the context of relationships with others.

The world needs to see authenticity like this – true disciples filled with the love of Jesus and living missionally.

You were reborn for more.  Don't settle for anything less.

1 Corinthians 11-14 makes perfect sense when compared to the typical Greco-Roman type "dinner party" which was common in Corinth at that time. (I'm sorry, but I forget the Latin term for this meal.)

During the "dinner party," the host chooses who to invite, and the host decides where everyone will sit. The most important people (to the host) will sit at the head of the table and will have first choice at the food. The less important people will sit at the foot of the table or stand out in the courtyard (which was often connected to the "dining room"), and these people would eat whatever was left over, in descending order of course. Also, the host would typically invite a well-known person (political, social, religious, philosophical dignitary). After everyone had eaten, the dignitary would speak in order to impress the people present with their knowledge or importance.

Now, compare that to 1 Corinthians 11-14, and we see how the gatherings in Corinth both imitated those dinner parties and also how they were to be different than those dinner parties. The primary differences were 1) the identity of the host (1 Cor 11), 2) the importance of the people present (1 Cor 12-13), and 3) who spoke and why (1 Cor 14).

Yes you have hit the nail on the head..everyone I know interprets this text wrong..of course it does not shock me cause they do not interpret life right either but your right on the money here baby!