The Schizophrenic God of Inerrancy 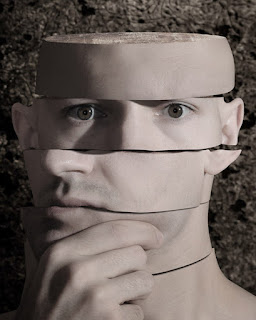 For those who embrace – even insist – on the inerrancy and infallibility of the Bible, there emerges a very odd version of a God who simply cannot make up His mind about things.

As an example, the infallible Scriptures are 100 percent clear about the fact that God causes evil and creates disasters:

“I form the light and create darkness, I bring prosperity and create disaster [“evil”]; I the Lord, do all these things.” [Isaiah 45:7]

“The LORD said to him, "Who gave human beings their mouths? Who makes them deaf or mute? Who gives them sight or makes them blind? Is it not I, the LORD?” [Exodus 4:11]

These verses, and several others like them, affirm without any doubt that God is the one who brings disaster, creates evil and makes people deaf and blind.

This is an inerrant and infallible statement of fact supported by an equally infallible and inerrant Holy Bible.

However, there are other scriptures that contradict these ideas and instead say:

“His works are perfect, and all his ways are just. A faithful God who does no wrong, upright and just is he” [Deut. 32:4]

Jesus also affirmed that it was Satan who came to “steal, kill and destroy,” not God.

So, taking all of these infallible and inerrant verses together, we know without a doubt that God does no wrong, and doesn’t destroy or kill, but that He most certainly brings evil, creates darkness and hands out birth defects.

We also know that God was the one who commanded David to take a census and then punished 70,000 people by killing them with a plague when David obeyed. [See 2 Sam.24:1]

At the same time, we clearly see that it was Satan who incited David to take a census, not God. [See 1 Chronicles 21:1]

We also know that God never tempts anyone to do evil [See James 1:13].

So clearly these inerrant and infallible verses tell us that God, and Satan, both commanded David to take a census and then God punished David and his people for giving in to the temptation which God never tempted him with.

Does that make sense to you?

“Just as it pleased the Lord to make you prosper and increase in number, so it will please Him to ruin and destroy you.” [Deut. 28:63]

“As surely as I live, declares the Sovereign Lord, I take no pleasure in the death of the wicked!” [Ezekiel 33:11]

So, God is pleased to destroy His people, but He takes no pleasure in their death.

If you do, please explain it to the rest of us.

All I can see is that there are competing voices in the scriptures. Some prophets see God one way – causing evil, creating birth defects and punishing sons for the sins of their fathers – and other prophets see God a different way – not causing evil or tempting people, or punishing sons for their father’s sins and taking no pleasure in the death of anyone.

Those who insist on an inerrant scripture ignore these discrepancies, or turn somersaults to make each contradictory statement true while ignoring the very obvious fact: The voices we hear in scripture are not infallible, nor inerrant.

So, what can we do about these verses? How can we discern which ones speak truthfully about God’s character and which verses miss the mark?

According to Paul, “The person with the Spirit makes judgments about all things” [1 Cor. 2:15]  and while quoting Isaiah’s rhetorical question “Who has known the mind of the Lord so as to instruct Him!?” [Isa. 4:13] responds shockingly: “But we have the mind of Christ!” [v. 17]

So, who dares to challenge and question the scriptures?

Because we have the mind of Christ.

Paul even reminds us that we will judge angels [1 Cor. 6:3]; and who are “angels” but “messengers from God”? [The word "angel" in scripture is literally translated as "messenger of God"]

Do we have an obligation to read the Scriptures through the lens of Jesus and with the mind of Christ?

Otherwise we are left with a schizophrenic God who is both good and evil, who is both tempting and never-tempting, who both creates birth defects and heals them, who delights in destruction and takes no pleasure in it, etc.

Is God the author of confusion?

Is God the one who is confused about who He is and what He does, or could it be that those who wrote about Him prior to Christ couldn’t see Him as clearly as we do now?

The only way to know God any better is to know Jesus. The more you come to know Him, the more you can clearly see through the mind of Christ what God is like.

I got confused by the title. Maybe schizophrenic isn't the best way to describe what you are discussing? Schizophrenia is a debilitating mental illness that often causes lifelong disability and can include violence and suicide.

I'm using the term to refer to the textbook definition of the term:


"A mental disorder of a type involving a breakdown in the relation between thought, emotion, and behavior, leading to faulty perception, inappropriate actions and feelings, withdrawal from reality and personal relationships into fantasy and delusion, and a sense of mental fragmentation.

(in general use) a mentality or approach characterized by inconsistent or contradictory elements."

Beautiful post Keith! Thanks so much for taking the time to write this out so concisely. I'll definately use this as Sunday school dialogue material :)

It's like you have never even oucjed up a book on theology, Hebrew, or hermeneutics. You really need to read more Keith! And the word is not "literally evil" , it is usually translated as calamity, because God is sovereign over all things!

Jesus as the face of God, the full revelation of God, is one of the key idea's I've experienced help my muslim friends understand Jesus in Christianity compared to Jesus in Islam.

Also reminded me of this short sermon by Brian Zahnd that came along at the right time in my life. http://wolc.com/watch--listen/sermon-archives/perfect-theology/

Blessings from the Philippines. I've got a few friends here who love to read your writing.

God did not command David to take a census [from II Samuel 24:1].

Keith, possibly in your mind, (even as from moral philosophy,) that the opposite of good must be evil? But to those who do their homework, this is not (and cannot be) so. Consequently, the slip to be fashioning false dichotomies would be abated.

weak (popular) Scripture translation is itself a type of "errancy". Surely Jerome got that ball rolling 16 centuries before us. This does not mean that we must forever labor beneath its legacy. Resist the myopia of cause, and be holding to Christ Jesus! Why should you know the remainder of your time on earth asking for the useless [evil] questions? Yet if you're coming to be building a group around your ideas, Keith, you've now off to a running start --- and with a vector that the ekklesia of God is-ever unable to abide.

Marshall, I truly wish you could try communicating clearly and directly without all the flowery and needlessly confusing nonsense. It really makes dialog so much more honest and wide open.

Anyway, the scriptures disagree about who commanded David to take the census.

"Again the anger of the Lord was kindled against Israel, and he incited David against them, saying, “Go, number Israel and Judah.” 24:1

"Then Satan stood against Israel and incited David to number Israel."

So...is it the Lord? Or is it Satan? Surely they are not the same?