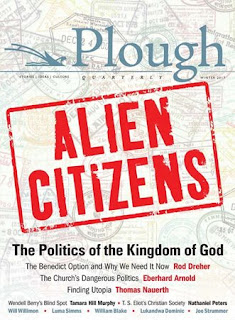 Plough has been hosting an ongoing discussion among Christians about the proper role of the believer in politics and public life. (See especially Plough Quarterly No. 11“Alien Citizens – The Politics of the Kingdom of God”).

Here is another refreshing perspective from Keith Giles:

During Christianity’s first three hundred years Christians were not entangled with politics nor tempted to advance their cause by passing laws. Interestingly, however, there were many Roman soldiers and political officials who converted to the faith. In fact, this happened often enough that several early Christian teachers gave instructions on how to respond to this trend.

READ MORE IN THE LINK BELOW: