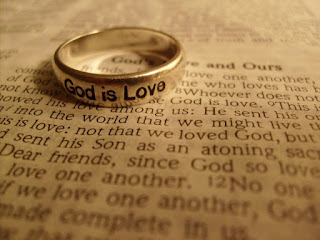 After a terrorist attack, or a mass shooting, people often ask “How could Christian non-violence have stopped that?”
What they mean is: “I’d like to see your strategy for handling a guy with a rifle shooting into the crowd”, and to be fair they have a very good point. Christian Non-Violence isn’t strong enough to stop a guy with a high-powered rifle who is in the act of mass murder. But, honestly, it’s not designed to do that.
Christian Non-Violence, which I prefer to call “Proactive Love” or “Preemptive Agape”, is designed to transform people – like this person with the high-powered rifle – into a person who also loves everyone [even his enemies].
In other words, the way we stop mass murderers with guns is we show them the love of Christ before they pick up their weapons and we wait for the Holy Spirit to transform their hearts from the inside out.
That’s how Christian Non-Violence [or “Proactive Love”] stops mass killers - It changes them on the inside before they become mass killers.
So, it’s not true that “the only way to stop a bad guy with a gun is a good guy with a gun.” There’s another way. You can stop the bad guy with a gun by transforming his heart with the Gospel of Christ.
The real problem, as I see it, is that so many Christians either disagree with this idea – and some of them disagree violently – or they essentially deny that this is possible, or practical.
Typically, Christians who are pro-violence will usually adopt a “Yeah, but” posture where they say, “Yes, yes, we can preach the Gospel to people. Sure. But at the same time we need to carry a loaded weapon so we can kill them if/when they start trying to kill us.”
This is not Christ-like. It’s also not what any follower of Jesus would have ever said or done prior to the Third Century after Christ formed the Church.
What we see throughout early Christian history [up until the time of Constantine] is a uniform agreement among believers that following Jesus meant love for enemies in the face of certain death.
Those earliest disciples of Jesus went rejoicing to their deaths, singing praises to God and celebrating the honor of sharing in the sufferings of Christ as they prayed for the forgiveness of those who were killing them.
I’ve posted a lot here on my blog about what those early Christians had to say when it comes to violence, carrying weapons, or serving in the military or government. You can read some of that HERE and HERE.
The bottom line is this: Jesus was very clear about the fact that he wanted his disciples to be known for their love. He wanted that love to start with one another and spiral outward to include the outcast, the poor, the sick, the imprisoned, the refugee, and yes, even our enemies. These verses from the lips of Jesus are not difficult to parse. He could not be clearer than he was on the Sermon on the Mount, and he ended his message about love by saying, “Why do you call me ‘Lord, lord’ and do not do what I say?”
Is Jesus really your Lord? Prove it by putting his commands into practice.
Do you love Jesus? Make it clear by obeying what He told you to do.
Will it be inconvenient? Yes.
Will it be challenging? You bet.
Will it be impossible apart from abiding totally in Christ? Absolutely.
Following Jesus will get you in trouble. It may even get you killed. This is why Jesus declared that no one could start following Him without first laying down their life, denying themselves, and taking up their own cross.
The plan is simple: Jesus wants to change the world with love. We are His ambassadors. He has given us the ministry of reconciliation. He has called us to be peacemakers. He has commanded us to be known for our love – even love that extends to the enemy who may be holding a high-powered rifle.
If we are successful, no one will want to pick up a weapon to kill anyone else because Jesus will have transformed their hearts. If we fail, we might be “counted as sheep to be slaughtered.” [See Romans 8:36]
Regardless of the outcome, nothing can stop us. Nothing can stop the advance of Christ’s Kingdom. When we are weak, He is strong.
"Peacemakers who sow in peace reap a harvest of righteousness." - James 3:18
“The kingdoms of this world have become the kingdoms of our Lord and of His Christ, and He shall reign forever and ever!” – Revelation 11:15
We have to abandon the myth that if we could just kill enough people we could make the world a better place. We have to admit that killing to protect others is in the same category as “Loving those who love you in return.”
Jesus calls us to something greater; something audacious and extraordinary. He calls us to love dangerously. To lay down our lives so that others may have the opportunity to know the transformative love of Christ that has turned us inside out and made us brand new.
The way we prevent evil is to pour out the unmerited love of Christ upon everyone we meet.
This mission is not for the faint of heart. We must count the cost. We must decide in advance that our lives are already lost for the sake of Jesus and His Kingdom.
Are you ready to change the world?
-kg

Great thoughts! Do you think violence is never justified as the lesser of two evils? I'm not completely certain at this point either way. I agree that the call of Jesus is to love our enemies even to death... However, I have questions about what that looks like when someone is trying to kill someone else and we have the ability to stop it in some way. Anyway, just a question I have. Thank you for the excellent post!

How do you stop a shooter or someone trying to kill someone else? What ability do we have to stop it?

This teacher did it by hugging the shooter at her school. - http://abcnews.go.com/GMA/story?id=1732518

Also, in Lee Camp's book Mere Discipleship he recounts the story of an ER nurse stopping a shooter in the hospital by walking up to her and hugging her until she put the gun down. I can't find the story online though. I think it happened a number of years ago.

The following is an extensive quote from Lee Camp's book Mere Discipleship (pg 39-40). It contrasts two ways of living. It is the perfect contrast to what Keith, and so many others, have been preaching about non-violence and pre-emptive love. The stories highlight that the world is watching and that the God's plan is for the church to display His manifold wisdom, which is Christ.

"'An eye for an eye, a tooth for a tooth. A .38 for a .38?' Or so queried a 1998 Associated Press account that reported on the amendment to Kentucky state law that extended the legal right to ministers and church officers to carry a concealed weapon in church buildings, even during church services. Reports cited a preacher in Somerset, Kentucky, as having a pivotal role in the new legislation. Interviewed by Maria Shriver on NBC's July 16, 1998, Today show, the preacher reported that individuals looking for money often visit churches and further intimated that having a gun would provide protection from those who might desire to steal church contributions. Bewildered Maria Shriver - representing the media, which Christians often portray as having little comprehension of the good news of Jesus Christ - asked the preacher if he did not understand that his reliance upon a handgun stood at odds with the Christian proclamation of peace and reconciliation.

"Imagine having the wife of Arnold Schwarzenegger - Hollywood's poster boy for violent entertainment - remind the church that the gospel bids believers to resolve conflict with other methods. The preacher responded that he was merely interested in having the right to carry a licensed weapon, a right granted to all other citizens. An on-air critic remarked that had Jesus heard this, it would have made him want to 'puke.' The critic reminded the preacher that churches are supposed to be an enclave of values markedly different from the world around: Christians are supposed to be protected in the armor of light, the breastplate of truth. Significantly, the preacher stated his disinterest in that argument as having any relevance to the current debate; such concepts, he replied, are about a spiritual battle.

"The gun-toting preacher stands in stark contrast to Joan Black, a nurse at the University of Southern California Medical Center in Los Angeles. Tom Tripp recounts that in August of 1993, a young woman, Sopehia Mardress White, brandishing a .38, came looking for a nurse named Elizabeth Staten, who had allegedly stolen away White's husband. Firing six shots, White hit Staten both in the stomach and in the wrist. When Staten ran into the emergency room, White followed her, firing again.

[From Tom Tripp, "Christ's Love," Leadership 15, no. 1 (winter 1994)] "There, with blood on her clothes and a hot pistol in her hand, the attacker was met by another nurse, Joan Black, who did the unthinkable. Black walked calmly to the gun-toting woman -- and hugged her. Black spoke comforting words. The assailant said she didn't have anything to live for, that Staten had stolen her family. 'You're in pain,' Black said. 'I'm sorry, but everybody has pain in their life...I understand, and we can work it out.' As they talked, the hospital invader kept her finger on the trigger. Once she began to lift the gun as though she would shoot herself. Nurse Black just pushed her arm down and continued to hold her. At last Sopehia White gave the gun to the nurse. She was disarmed by a hug, by understanding, by compassion. Black later told an AP reporter, 'I saw a sick person and had to take care of her.'"

If you have not read Lee Camp's book, then I suggest you get it immediately. It is absolutely fantastic!!!

Hey Joe. There are many things that can be done that don't require taking someone else's life in this situation. We've been so conditioned that violence is the only option we can't see past that option.

Just a reflection in regards to the "lesser of two evils".... there is no such thing. Evil is evil.