HAIL, THE KING OF PEACE 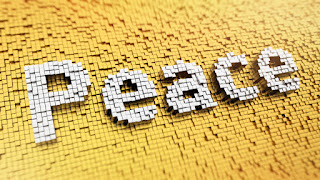 The birth of Jesus is God's most radical act of peacemaking. The Jews were looking for a Warrior King to overthrow the Roman Empire that was occupying their land. They wanted a Messiah who would carry a sword and lead them on to victory. They were desperate for a regime change in Palestine.

What they got instead was a baby laying in a manger. They got a host of angels who arrived, not to wage war, but to sing "Peace on Earth, good will towards all men!"

They got a Messiah who didn't carry a sword, and in fact told them to lay down their weapons. "If my kingdom were of this world, my servants would fight," he said.

The got a Savior who came to bring a regime change - in their own hearts - to enthrone Jesus as their personal Lord [King], not a political kingdom built on war, but an internal kingdom built on a transformation of the human heart.

They got - and we got - a King who taught us to love those who hate us, and to return kindness towards those who persecute us. Not so we can become doormats, but so that his brand of unmerited love could be fully displayed - like stars that shine in the darkest night - and his brilliant love could blaze outward in the face of even the most violent attack.

"Blessed are the peacemakers," Jesus told them. "for they will be called 'the sons of God'."

It was prophesied by the prophet Isaiah that the Messiah would do no violence, and that His Kingdom would usher in an endless reign where men would make war no more, and beat their swords into ploughshares, and pledge their allegiance to the "Prince of Peace".

Jesus rode a donkey - not a war horse - into Jerusalem and wept because his people did not know "the things that make for peace."

Even after Jesus was brutally murdered on the Roman cross, having done no violence, and even having forgiven those who nailed them there, he rose from the dead and said, "Peace be with you".

Sadly, there are some who take the name of Christ, but do not accept that Jesus came to bring an everlasting peace that began 2,000 years ago and that continues to grow and expand - like a small bit of yeast that eventually permeates the entire lump of dough. This is partly why it's taking a bit longer than necessary to fully realize the peace of Christ in our world.

We still need to hear the words of Jesus afresh, today. As we celebrate the birth of the Prince of Peace, the King of Love, let's not forget that our Messiah came to us with the pronouncement of peace on Earth.

Let's put his words into practice and realize this promised kingdom of peace that is wide open to all who would have the audacity to believe it could be true.