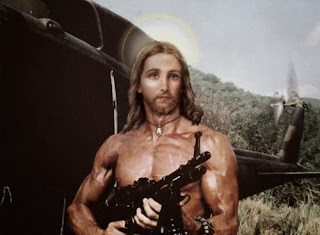 It has to start with a redefinition of the term "Christian" from "one who obeys Jesus" to "one who is in agreement with a set of doctrinal statements". Then one may behave however one likes without doing violence to the concept of "being like Christ" as a prerequisite for identifying with Jesus.

Over and over again, we read news items with headlines that reveal the sad news:

"Christian Tutsi's Slaughter Thousands Of Their Hutu Brothers in Rwanda"

Is this what Jesus had in mind? Did Jesus come to earth as an infant, and teach us to love our enemies, turn the other cheek, bless those who curse us, do good to those who hate us - and Himself forgive those who nailed him to a Roman cross - so that those who come after Him could form an army and slaughter their enemies?

So, if we fight, are we truly His disciples? Or are we fighting for the wrong kingdom?

Yes. When we take up arms and kill our enemies we are doing so for the kings and kingdoms of this fallen world.

As a follower of Jesus, there are many things worth dying for, but there is nothing - nothing - worth killing another human being for.

What could make me betray my Lord Jesus and take another life in disobedience to His clear commands to love and forgive? If I am more loyal to my nation than I am to Jesus, then I am not fit for His Kingdom.

“If any man come to Me and hate not his father and mother, and wife and children, and brethren and sisters, yea, and his own life also, he cannot be My disciple." - Jesus (Luke 14:26)

So, let's be clear: Someone who is like Jesus cannot take up arms and kill another human being. Anyone who does this, in the name of God, or country, or patriotism, or national pride, or "freedom" is doing so in outright defiance of Jesus.

If Jesus is Lord, then let us obey His commands:

“You have heard that it was said, ‘Love your neighbor and hate your enemy.’ But I tell you, love your enemies and pray for those who persecute you, that you may be children of your Father in heaven. He causes his sun to rise on the evil and the good, and sends rain on the righteous and the unrighteous. If you love those who love you, what reward will you get? Are not even the tax collectors doing that? And if you greet only your own people, what are you doing more than others? Do not even pagans do that? Be perfect, therefore, as your heavenly Father is perfect." (Matthew 5:43-48)
Posted by Keith Giles at 5:06 PM

Truly I say, very incisive coming on after Mandela's passing and on the eve of Pearl Harbor remembrance.

I agree 100%--I have a Christian friend who carries knives,guns,and does karate-he told me that when he is in a restaurant he imagines in his mind about how many people he could kill with his gun--im concerned as to whether or not he is actually saved.

This short post is excellent and powerful. Thank you for speaking straight to the point.

We again address the issue of the conscientious objector.

Agreed. To live like this does require a redefinition of following Jesus.