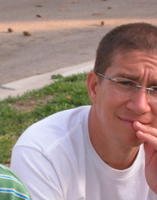 PAUL MARTIN: SOUL SURVIVOR IN THE USA:
Soul Survivor started in England as a simple youth conference back in 1993 and has since grown into a global youth movement of worship and servant evangelism. Today, an estimated 225,000 young people have attended Soul Survivor events in the UK, South Africa, Holland, Norway, Australia, Canada and the United States of America.
Early on in the movement, there was a theological message that worship and care for the poor were Biblically inseparable ideas. Soul Survivor began to be every bit as much about creating humanitarian agents of change as it was about providing a great worship experience.

Soul Survivor USA began after Paul Martin visited a Soul Survivor UK festival in the summer of 1998, while on a work placement in London. Martin and his wife, Erica, originally had no intention of starting any new movements in America. At the time, Martin was in England as the President of Vineyard Music Group, UK, but this job had a built-in expiration date. “One of my job descriptions was to hire and train my successor because I was only allowed a two year work contract,” says Martin.

After attending that Soul Survivor event, Martin and his wife new that God was calling them to start something just like it in Southern California.
Challenged by the reality and authenticity of what they saw, Paul and Erica Martin returned to America to launch the first US Soul Survivor youth event.
However, the Martins discovered very quickly that getting a ministry like this started would be a greater challenge than they first realized. “There are twenty million people here in Southern California alone,” says Martin. “This is a country of it’s own almost. Soul Survivor Holland, (is trying to reach) a total population of three or four million, and we’re looking at twenty million in Orange County.”

Beyond the sheer size of the potential missions field in front of them, Martin and his wife also faced a cultural barrier. Using the tried and true UK format for Soul Survivor didn’t attract thousands of youth. Instead they started attracting people in their thirties.

To make things work, Martin had to make some hard decisions. The biggest change meant catering to the American Christian Summer Camp model. “One of the things I loved about the UK event was that it didn’t smell like a Summer Camp,” says Martin. “We’ve had to adapt to the American church culture where Summer Camp has been part of the youth culture for decades. It’s just what it means to be in a church as member of a youth group. You go to Summer Camp in the summertime. Everything in me resists the Summer Camp line, (but) it’s the language the churches speak and that’s what they respond to. Call it a festival and people will bring their worship team, call it Summer Camp and they’ll ask you how much and where is it”?

In July of 2002 Soul Survivor USA completely switched their approach to reaching youth in America. “We said, ‘If you’re over 17 you cannot come to a Soul Survivor event,’” says Martin. “We said to seven hundred people you can’t come anymore, which was very painful, but we doubled the High School number.”

With a new focus on reaching teens, Soul Survivor events in America have since drawn thousands of people from a broad range of denominations, and over 18 states.

A typical Soul Survivor event involves worship, ministry time, arts and music, but the sum is greater than its parts. “After the main session (involving worship and teaching), these various venues open up. From 8:30 pm to midnight, there are bands, they have dance and hip-hop venues and the art tent, and it’s a scene,” says Martin. “People don’t have to go to anything, it’s not required, but because they don’t have to go to anything, they go to everything, you know?”

The response to the arts tent at Soul Survivor events has been one of the most staggering. “It’s as if they are dying for water,” says Martin. “The kids can come in and paint as much as they want. Some of the stuff is scary, some of it’s not really religious art, and most of these kids have not really painted since they were in kindergarten,” he says, “It’s another value to incorporate the arts into our Christianity, it’s again, an holistic approach.”

Soul Survivor is a ministry that does more than provide a place for youth to gather and worship and hang out. They’ve organized large-scale servant evangelism events worldwide to demonstrate the compassion of Christ to a world that’s never seen Him. “The idea is to very simply not just preach service to the poor, we’re going to model what it looks like so the Youth pastors and the kids can get a vision for it,” says Martin. “It’s one thing to say, ‘we need to go pick up trash and paint an orphanage’, it’s another thing to get in the car and go paint. It’s more important what we do than what we believe or say,” he says. “We work alongside the city managers and we kept our mouths shut, no witnessing, just service, and it is amazing.”

What Martin has discovered as he leads these types of community service events is that young Christians in America are eager to serve. “Young people are the most open to this. The clay is still wet. It represents something in the youth culture today where they’re tired of hearing stuff they just want to get out and do it,” says Martin.

Martin has even greater dreams of touching Orange County with the tangible compassion of Christ one day. “I really see the injustices that have been done in South Los Angeles burning in my heart. I think that community has suffered a lot. There’s just something in me, to have ten or twenty thousand middle class kids coming into communities like that expressing their faith and their love for humanity in practical ways,” he says, “That is something that can keep me up at night. (My goal is) to create Christians who just have a deep understanding of the true totality of the Gospel,” he says. “We’re trying to slowly model the idea that worship and justice are very normative notions that need to be part of our daily walk.”

Martin explains some of the appeal for what Soul Survivor does as being directly related to their entire approach to the Christian life. “There’s something broader than this,” says Martin. “So by what we’re doing, in this holistic approach to life, a lot of these teens are seeing a something new. It’s like, ‘What? I get to go paint and skate and express my feelings and dance and this is all inclusive in what it means to follow Christ?’ So, in all that, our hope is that these youth pastors who bring their kids to Soul Survivor can go back to their churches and maybe find other ways to relate to their teens, as opposed to some of the ways that have been handed down before, based on laws and rules.

“As long as the churches are saying that what we’re doing is a good thing, and that their kids lives are being impacted,” says Martin. “Then our goal is just to keep going.”
Posted by Keith Giles at 4:17 PM