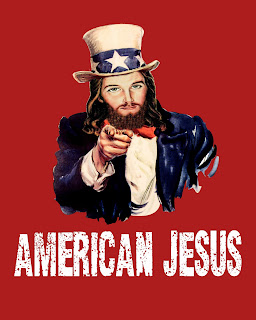 "God made man in his own image and man returned the compliment." - Blaise Pascal

Christians in America have a problem. They've created for themselves a version of Jesus that doesn't really exist.

This Star-Spangled version of Jesus is pretty much the exact opposite of the one we find in the Gospel record.

This Americanized Jesus is anti-immigrant whereas Jesus was an immigrant.

Their Jesus is pro-war even though the actual Jesus was called the Prince of Peace and told us to love our enemies rather than kill them.

Their Jesus is patriotic even though the real Jesus never pledged allegiance to any nation, and came to bring all nations together as one loving family under His own banner of agape.

Their Jesus is a blonde-haired, blue-eyed capitalist, even though the real Jesus was a brown-skinned, brown-eyed Jewish man who would most likely be racially profiled by airport security.

The Americanized Jesus wants to be your co-pilot on the road to the pursuit of happiness, but the actual Jesus told us to surrender all that we own and take up our cross to die to ourselves on a daily basis. He also said not to trust in money but to freely give to whomever asks of us.

The red, white and blue Jesus is totally ok with torturing our enemies and bombing other nations, whereas the real Jesus told us to treat others as we hope to be treated, and that those who live by the sword will die by it themselves. He also said we should bless those who persecute us and pray for those who want to harm us.

Yankee Doodle Jesus is often compared to the American soldier because both were willing to lay down and die for your freedom. However, only the real Jesus actually died without attempting to kill as many other people as he could before he did so. He just surrendered his life out of sincere love for both those who loved him and for those who were nailing him to the cross.

The imaginary Americanized Jesus loves America more than every other nation. He blesses this nation more than He blesses the rest. Clearly, He has a plan for them that is more wonderful, and more special than any other nation. But the real Jesus loves all the nations equally. In fact, his love isn't for the national entities, but for the human beings who find themselves living in those places. They are all made in the image of His Father. He died for each of them. He blessed all of them equally. And if those who live in America are more financially secure than other nations, this should be taken as a sign of responsibility to care for those who are not as financially stable, not as a sign of our favored nation status with the Almighty.

The real Jesus is concerned about the poor and even suggests that the way we love them indicates how much we actually love Him, or not.

In short, many Christians in America actually worship a version of Jesus that doesn't really bear any actual resemblance to the real Jesus we see in the New Testament.

I once believed in that Star-Spangled Jesus, but not anymore.

My faith is now firmly centered in the Jesus we read about in the Gospel record. He is no respecter of persons. He recognizes no political system. He regards no nation any different from another. He loves everyone. He died for all of us. He invites everyone into His family and calls all of us to join in the great invitation to sit at His table.

There is only one Jesus. He wears no colors but His own.

NOTE: My new book, "Jesus Untangled: Crucifying Our Politics to Pledge Allegiance to the Lamb" is available now on Amazon!

What Would Make America Great
I am heartbroken by the hatred and discord that has become so prevalent in the news. I guess I have been living in a bubble. I am colorblind and try to love everyone I meet with the love Jesus has given me to share. I volunteer at a pregnancy center that serves all races and attempt to give the women I meet love and hope in Jesus. My church is multi denominational and I have relationships with individuals from many nationalities. So I'm shocked and saddened when I am faced with the fact that there are people who hate me because of the color of my skin and to know that the hatred comes from deep pain and abuse. But what can I do. I am only one Middle Class American White Woman.

Well, I can open my mouth and speak truth and maybe someone will hear and share and maybe God will use me to make a difference in someones life.

Do you remember the 1965 song "What the Word Needs Now Is LOVE"? The same is still true today and the source of Love is God. The further we move from One Nation Under GOD the more hate and violence will become the norm. The answer to our national condition will not come from Washington. It will come from individuals who decide to allow the love of Christ to dwell richly in them and are committed to allow that love to flow through them into a hurting world.

I woke up at 3 am this morning with these thoughts in my head and I am writing this blog post because I felt compelled to share them:

1. My favorite verse to quote to my children. They call it Mama's verse. "Let no unwholesome talk come out of your mouth, but only what is useful for building others up according to their need."Eph.4:29 NIV. Imagine Facebook if this was a rule.

2. What if American controlled their thoughts instead of allowing the news to pump poison into their minds every day. Consider this verse from Philippians. "Finally Brothers and sisters,whatever is True, whatever is noble, whatever is right, whatever is pure,whatever is lovely, whatever is admirable--if anything is excellent and praiseworthy--think about such things." Ph. 4:8 NIV. There is a lot of good in our world. Imagine if these events were considered more newsworthy.

3. And finally this, "Do nothing out of selfish ambition or vain conceit. Rather, in humility value others above yourselves" Ph.2:3. What if we would get over ourselves and focus more on the needs of those around us.

Our enemy is not another race, the government officials, the media or any other entity. "For we wrestle not against flesh and blood, but against the rulers, against the authorities, against the powers of this dark world and against the spiritual forces of evil in the heavenly realms. Ep. 6:12 The enemy is Satan. He is a thief and a Liar. "the thief comes only to steal and kill and destroy;" John 10:10.