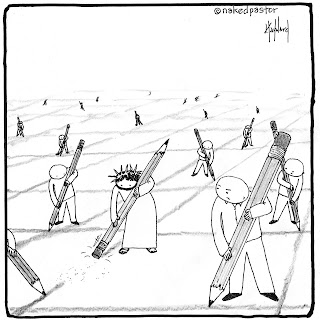 I overheard a conversation on the train the other day. One guy was from ST. Louis. The other guy from California started going on about how great it was that the Rams were back in LA. The St. Louis guy shared how he now hates the team but used to love them. The LA guy hated them for leaving but now can't buy enough jerseys and hats for his entire family.

This sort of arbitrary tribalism is so stupid and petty. We "love" a team because now they are "Our Team", even though a year from now they could become another team somewhere else.

What is it about "our team" we love? The coach? The players? The logo? The mascot?

What we love is simply this: We find part of our identity in that brand and we attach emotionally and we defend the "honor" of that brand even though it has nothing to do with "us" in reality.

People do it with sports teams...[that's partially where we learn this behavior at an early age, in school for example]....and they do it with their State, and their Nation, and yes, even their faith.

But Jesus proclaimed that "God so loved the World"...not just the Jews. Peter had to learn that God wanted to embrace the Gentiles, and that was a huge paradigm shift for him, and for other Jewish Christians.

Paul had to remind the Christians in Galatia that "we are all one in Christ Jesus" and that in the Body of Christ we no longer recognize class [rich/poor], sexism [male/female], nationalism [jew/gentile], or any of those other man-made divisions.

The Gospel is for everyone. God loves everyone.

Do that and forget about your nationalism.