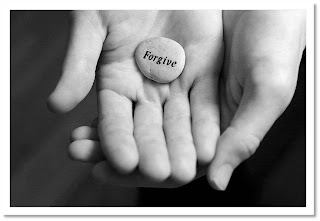 It’s one of the very hardest things in the world for most of us to do – Forgive.


Yet, Jesus commands us to forgive others, and not only to forgive them, but to forgive them in the same way that we have been forgiven by God. That’s a lot of forgiveness. In fact, it’s complete forgiveness that let’s go and forgets, as if the wrong doing never even took place.


But that’s not all that Jesus has to say about the topic. I hope you’re sitting down for this.
Jesus actually says that he won’t forgive us if we don’t forgive others.


Yes. He really does. Right here:


Whoa Nelly. Is Jesus suggesting that his forgiveness to us is conditional? I’ve never once heard a single sermon on such a thing in my entire life. How can that be?


Perhaps Jesus is forgetting that "if we confess our sins he is faithful and just to forgive us our sins and cleanse us from all unrighteousness"? (1 John 1:9)


And what about the fact that the Psalms tell us that "as far as the east is from the west, this is how far he has removed our sins from us"?(Ps 103:12)


What’s Jesus talking about here? How can he say that we can’t be forgiven of our sins unless we first forgive others of their sins against us?


The reason is very simple: Unforgivness is a sin.


So, if we hold a grudge against someone, that is a sin. If we refuse to repent of our sin, and if we do not stop practicing this sin of unforgiveness, we cannot be forgiven of it.


In order to receive forgiveness, we have to honestly confess our sins to God and we need to repent of these actions which hurt our relationship with God - and which also hurts us as well.


As hard, or even as impossible, as forgiveness can sometimes be, we have to learn to forgive anyway.


See, this is why Jesus also commands us to love our neighbor as we love ourselves. Because we give ourselves permission to do horrible things and still consider ourselves worthy of forgiveness and mercy. That means we need to love others enough to consider that they, also, are worthy of being loved and forgiven and shown mercy.


Now, the truth is, we are no more “worthy” of forgiveness than anyone else is, including the ones who have harmed us. But Jesus doesn’t give us any room to argue. Our forgiveness is tied to our forgiveness of others.


Let’s repent of the sin of unforgiveness and extend the same grace and mercy and love that we want so much for ourselves.

Forgiving others unlocks you from the prison of bitterness. It also sets you free to receive God’s forgiveness.

When Jesus made that statement those folks were still under the law..he said it to convict..after his death and resurrection and gods spirit in dwelling true believers they will be under gods compulsion to forgive...it's a good way for you to check yourself out to see if your really saved or not.

Could you tell me the source of that quote from C. S. Lewis? I haven't been able to find it.

I've seen it quoted in several places, and in the book "unchristian" but I'm not sure the actual reference source.