Re-Post: Raging Against Your Own Machine 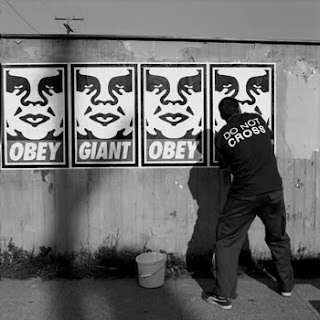 It was nearly 15 years ago that Shepard Fairey began his subversive, counter-cultural sticker campaign based on the face of Andre the Giant and a single word, "Obey".

The original vision he had was to create an underground movement designed to provide a counterpoint to the thousands of corporate advertising images assaulting us on a daily basis.

Fairey wanted to create a logo for a company that didn't exist and plaster it all over the city (and eventually the Nation and now the World).

Essentially, Fairey wanted to help people see advertising and media as propoganda aimed at our pocketbooks. He made his image imposing, like "Big Brother" looking down on society and commanding everyone to "Obey" the messages on billboards and in the media.

His message was meant to be ironic. His hope was that when people saw the overt command to "Obey" there would rise up within them a sense of individualism and personal identity that might make them say, "No. I will NOT obey!" and perhaps people would begin to think for themselves.

In a recent issue of PRINT Magazine (Jul/Aug, 2006), there is an article about Fairey and other street artists who have a desire to send a counter-cultural message via stickers and posters posted illegally on the sides of buildings and the back of street signs.

One book, "The Design Of Dissent" by Milton Glaser, makes the observation that today's society is immune to outrage. We read the newspaper, we watch atrocities on television and we move on with our lives.

This social apathy, in the opinion of Glaser, calls for an escalation of social protest "..to overcome the endless assault on our sensibilities by the official voices of the government." In Glaser's mind, what is needed is "..100 times more dissent that appeals to people's intelligence."

This may be true, or it may not be true. What I find interesting about this theory is that most modern advertising appeals to the lowest common denominator of intelligence, at best. At worst, the overall tone of advertising seems to pander to, and even to encourage, the ignorant majority.

Even more ironic to me is that Fairey's creation, "Obey", has now evolved into a full-blown corporation. The Obey logo can now be found on t-shirts, hats, skateboards and toys. Recently a $60 coffee-table book of Fairey's art was published to chronicle his exploits and rise to fame and fortune.

Here is a lesson for us. A single person has a vision to subvert the system, and in time his success lures him to join the enemy and to become exactly what he was raging against in the first place.

Now the Obey Giant logo is trademarked and used to sell products, not to make a commentary on the media-saturation of our times and the consumer-oriented society we have become. Now the symbol is used to promote consumerism, not to rebel against it.

I wonder if the Church has fallen into the same trap?

Have we been lured into thinking that, to be effective in society we must become exactly like the world around us?

The Church began with a single vision. Our founder, Jesus, was a revolutionary with a subversive message that we could all begin to live in The Kingdom of God today. His message was a threat to the Pharisess and the Roman Government. It threatened their authority structures. It called into question their defintions of righteousness, equality and holiness. It was a message that got our founder arrested, tortured and ultimately put to death.

From the earliest days, the followers of The Way continued this subversive, counter-cultural movement. They met quietly in homes. They re-defined family. They called one another brother and sister and loved and cared for one another as if they truly were of one family.

The early Church was persecuted for such counter-cultural behavior. People saw them as strange and treated them with disdain. Yet even though followers of Jesus were met with harsh persecution, hundreds of people continued to join their ranks. The radical lifestyle of these "Jesus People" caused people to wonder, "How can they give so much to strangers?", "What makes them so different?", and they wanted to know more.

Even the message preached by these people, that their founder Jesus had actually come back to life, seemed to be proven true by the radically changed lives of His followers.

In time, the followers of The Way actually did "turn the world upside down" (Acts 17:6-KJV). They endured horrific persecution and preserved the teachings of Jesus by living them out and sharing them with their new spiritual family for over three hundred years. That's longer than America has been a Nation.

Today, the Church looks an awful lot like the world around it. We do not stand out from the crowd. We are not known for our acts of kindness, love or compassion. We have aligned ourselves with a politcal platform and allowed figures in the media to speak for us.

In many ways, we have become the machine we intended to rage against. We have joined the system we were created to subvert and overthrow.

Maybe the place we need to begin is to repent of our blindness and to return to the teachings of Jesus Himself.

Enjoyed what you have to say with love. As a side point my favorite artist is Jenny Holzer that got her start plastering "inflammatory essays" over NY. But any way -- I live for the day when "Jesus Is Lord" becomes the most offensive, inflammatory saying imaginable. I think it is coming.